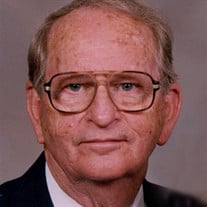 Mr. James Paul Pearson, age 90, of Elizabethton, TN went home to be with the Lord on Thursday, October 26, 2017 from Franklin Woods Community Hospital. A native of Elk Mills, TN he was the son of the late Grover Clyde and Hattie Mary Anna Eggers Pearson. He was a graduate of Hampton High School where he played basketball and he attended Milligan College. Mr. Pearson had worked at Bemberg, Beaunit and North American Rayon and retired as a Vice-President and Plant Engineer in charge of Research and Development at Universal Fibers, formerly Camac Corporation, Bristol, VA . Mr. Pearson was a long standing member of 67 years at Southside Christian Church, Elizabethton where he was instrumental in building the new sanctuary. He was a former teacher in the Adult and Youth Sunday School Classes and had served as a Deacon and Elder. Mr. Pearson enjoyed riding motorcycles, working on cars, mowing the yard, and fixing anything for others. In addition to his parents he was preceded in death by his wife of sixty-four years, Dorothy Clark Pearson; five brothers, Howard Pearson, Dale Pearson, Ernest Pearson, Edsel Pearson and Doug Pearson and a sister, Geraldine Stanton. Those left to cherish his memory include a son, Dr. James M. Pearson and wife Debby, Johnson City; a daughter, Jeanie Cakebread and husband Bruce, Elizabethton; grandchildren, Dr. Zack Pearson and wife Janet, Johnson City, Beth Stone and husband Josh, Greeneville, TN, Renee Wilcox and husband Craig, Stafford, VA and Jared Cakebread, Butler, TN; great-grandchildren, Kaedon, Ivy and Laurel Pearson, Elynn and Emmalee Wilcox and Josh and Lively Stone. Several special nieces and nephews also survive. A service to honor the life of Mr. James Paul Pearson will be conducted at 5:00 P.M. Sunday, October 29, 2017 at Southside Christian Church, Elizabethton with Mr. Mike Koruschak, minister officiating. Music will be under the direction of the church. The family will receive friends at the church on Sunday from 3:00 – 5:00 P.M. prior to the service or at the residences of his son and daughter at other times. Graveside service and interment will be conducted at 10:00 A.M. Monday, October 30, 2017 in Happy Valley Memorial Park. Active pallbearers will be Zack Pearson, Jared Cakebread, Josh Stone, Craig Wilcox, Kaedon Pearson, Danny Simerly, Nick Blevins and Drew Pearson. Honorary pallbearers will be his nephews, whom were all special to him; Otis Gibson, Sam Kyte and the Southside Christian Church family. All those attending the graveside service on Monday are asked to meet at the cemetery at 9:50 A.M. Those who prefer memorials in lieu of flowers may make donations to the Carter County Christian Men’s Fellowship, Scholarship Fund, c/o Scott Reynolds, 311 S. 2nd Street, Elizabethton, TN 37643 or to Southside Christian Church, 1610 Southside Road, Elizabethton, TN 37643.

Mr. James Paul Pearson, age 90, of Elizabethton, TN went home to be with the Lord on Thursday, October 26, 2017 from Franklin Woods Community Hospital. A native of Elk Mills, TN he was the son of the late Grover Clyde and Hattie Mary Anna Eggers... View Obituary & Service Information

The family of James Paul Pearson created this Life Tributes page to make it easy to share your memories.

Send flowers to the Pearson family.