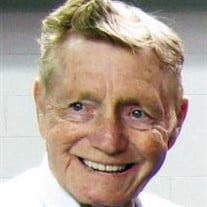 Mr. J L "Poss" Collins, 84, of Elizabethton, passed away on Sunday, May 7, 2017, at the James H. Quillen VA Medical Center Hospital. He was the son of the late George E. and Maggie Alice Taylor Collins and was born in Carter County. In addition to his parents, Mr. Collins was preceded in death by his step-mother, Annie Pierce Collins; one sister, Cora Glover; and three step-sisters, Pauline Odom, Louise Grindstaff and Helen Phillips. Mr. Collins was a veteran of the United States Army having served during the Korean Conflict in the 2nd Infantry Division, "L" CO. 23rd Infantry War Branch. He was engaged in battle during the war including the battle of Chip Yon Ni, the May Defense, the Spring Defense and the Battle of Heartbreak Ridge. He was the proud recipient of several citations and medals relating to his service including the Good Conduct Medal, the National Defense Medal, the Korean Service Medal, the ROK Korean War Service, the Korean Presidential Unit Citation, the 50th Anniversary Korean Commemorative award, the United Nations Medal, the American Defense Commemorative award, and most notably, the Purple Heart. He was very patriotic person who loved God, his family and the USA. From July 1957 until March of 1989, Mr. Collins was employed at the James H. Quillen Veterans Administration Hospital as a supervisor in the nutrition and food service department. He was also the owner/operator the Poss Variety Store on Stoney Creek for many years. He was member of the V.F.W., and the D.A.V. as well as being an avid collector of Korean War Memorabilia. He enjoyed watching the Lady Vols Basketball Team, NASCAR and as they were growing up, watching and supporting his grandsons as they played in various sports. He loved to go to flea markets, and was an extensive traveler. He was a member of First Christian Church. Those left to cherish his memory include his wife, Edna Humphrey Collins of the home; a son, Larry D. Collins and his wife, Chris, Johnson City; a daughter, Teresa Collins Carver, Elizabethton; four grandsons, Ryan Collins and his wife, Brittany, Evan Collins, Sean Collins and his wife, Grace, and Alden Collins. Several nieces and nephews also survive. A service to honor the life of Mr. Collins will be conducted at 7:00 PM on Wednesday, May 10, 2017, in the Sunset Chapel of Hathaway Percy Funeral and Cremation Services with Mr. Michael Klaus, Mr. John Smith, ministers, and Dr. David Mills, officiating. Music will be under the direction of Mr. Gene Estep, organist. The family will receive friends in the funeral home chapel from 5:30 - 7:00 PM on Wednesday prior to the service and at the home at other times. The graveside service and interment will be conducted at 10:00 AM on Thursday, May 11, 2017, at the Mountain Home National Cemetery. Active pallbearers will be selected from family and friends. Honorary pallbearers will be the men of First Christian Church First Saturday Breakfast Group. Military honors will be accorded by the Carter County Honor Guard. Those wishing to attend are invited to meet the family at the funeral home at 9:00 AM on Thursday to go in procession to the cemetery, or at the cemetery at 9:50 AM. The family expresses a heartfelt and sincere thank you to all the doctors, nurses, staff, therapists, housekeeping staff and food service workers at the Community Living Center at the James H. Quillen VA Medical Center for all the love, care and support shown to Mr. Collins and the family. Online condolences may be shared with the family on our website, www-hathawaypercy.com. Hathaway Percy Funeral and Cremation Services is serving the Collins family. Office 423-543-5544.

Mr. J L "Poss" Collins, 84, of Elizabethton, passed away on Sunday, May 7, 2017, at the James H. Quillen VA Medical Center Hospital. He was the son of the late George E. and Maggie Alice Taylor Collins and was born in Carter County. In addition... View Obituary & Service Information

The family of J L "Poss" Collins created this Life Tributes page to make it easy to share your memories.

Send flowers to the Collins family.