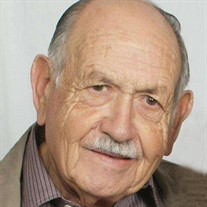 Mr. Howard Perry, age 85, of Johnson City, TN passed away on Monday, March 25, 2019 at his residence. A native of Carter County, TN he was the son of the late Earnest L. Perry and Pansy Campbell Perry. Mr. Perry retired from Raytheon after thirty-six years of service. Following his retirement he worked seventeen years with Murray Guard. He was a U.S. Army Veteran of the Korean War. He was a member of University Parkway Baptist Church where he served as a deacon and helped work in the food pantry. Mr. Perry enjoyed gardening, loved sports, especially baseball, and watching his grandchildren play sports. In addition to his parents, he was preceded in death by a brother, Leon Perry and three sisters, Blanche Sass, Norma Carrier and Trula Bullock. Those left to cherish his memory include his wife of sixty-two years, Evelyn Bageant Perry, of the home; a son, Dr. Tim Perry and wife Ronda, Kingsport, TN; three special sons, Adam Reeser and wife Ashley, Andrew Reeser and wife Ashley, and Nathaniel Horton and wife Kristen, all of Johnson City; special grandchildren, Lauren Reeser, Landon Reeser, Caleb Reeser, Logan Reeser, Caleb Faulk and Christopher Horton and two sisters, Linda Persinger, Bluff City, TN and Judy Dowell, of Pennsylvania. A service to honor the life of Mr. Howard Perry will be conducted at 7:00 P.M. Wednesday, March 27, 2019 in the Sunset Chapel of Hathaway-Percy Funeral and Cremation Services with Pastor Scott Thompson officiating. Eulogy will be given by Dr. Tim Perry. The family will receive friends at the funeral home from 5:00 – 7:00 P.M. on Wednesday prior to the service or at the residence at other times. Graveside service and interment will be conducted at 10:45 A.M. on Thursday, March 28, 2019 in Mountain Home National Cemetery. Military honors will be accorded by the Carter County Honor Guard. Active pallbearers will be selected from family and friends. Honorary pallbearers will be R. H. Milhorn, Roger Cooper, Carlos Smith and Gene Bullock. Everyone will meet at the cemetery at 10:40 A.M. on Thursday for the graveside service. Those who prefer memorials in lieu of flowers may make donations to University Parkway Baptist Church, Food Pantry, 219 University Parkway, Johnson City, TN 37604.

Mr. Howard Perry, age 85, of Johnson City, TN passed away on Monday, March 25, 2019 at his residence. A native of Carter County, TN he was the son of the late Earnest L. Perry and Pansy Campbell Perry. Mr. Perry retired from Raytheon after... View Obituary & Service Information

The family of Howard Perry created this Life Tributes page to make it easy to share your memories.

Send flowers to the Perry family.