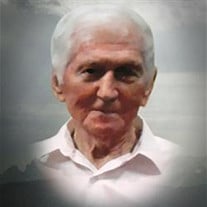 Howard Wilson Morrison, age 81, of Kingsport, TN a wonderful husband and very loving Christian man, went home to be with his Lord on Friday, October 18, 2019 from Kingsport, TN. He was the son of the late Charlie S. and Eva Fields Morrison. He worked as a painter for many years. He attended Poplar Grove Church of Sullivan Gardens. Howard was very attentive and caring to his family and was a very comical man. He was a U.S. Army veteran. He loved his God, family and flag; enjoyed watching wrestling and game shows on television and playing cards. In addition to his parents, he was preceded in death by a wife, Grace Crawford Morrison and a brother, Paul Dean Morrison. Those left to cherish his memory include his wife, Nancy Morrison, of the home; a son, Timothy Howard Morrison; a daughter, Cathy Marie Morrison, Bristol, TN; a step-daughter, Sarah Simpson and husband Tim, Kingsport, TN; a step-daughter, Deborah Hensley, Bristol, TN; grandchildren, Frankie Allen Morrison, Lynna Pearl Morrison, Timothy Coy Morrison, Joshua Wayne Morrison, Chad Allen Morrison; Elijah Simpson, Denzel Hensley and Cheryl Whitaker Hensley; six great-grandchildren; a brother, Bert Wilbert Morrison and two sisters, Dorothy Mae Morrison and Roberta Morrison. A service to honor the life of Howard Wilson Morrison will be conducted at 7:00 P.M. Friday, October 25, 2019 in the Sunset Chapel of Hathaway-Percy Funeral and Cremation Services with Pastor Gary Calhoun officiating. The family will receive friends at the funeral home from 5:00 – 7:00 P.M. on Friday prior to the service. Graveside service and interment will be conducted at 11:00 A.M. Saturday, October 26, 2019 in the Garland Cemetery, Erwin, TN. Military honors will be accorded by the Carter County Honor Guard. Everyone is asked to meet at the cemetery at 10:50 A.M. on Saturday for the graveside service.

Howard Wilson Morrison, age 81, of Kingsport, TN a wonderful husband and very loving Christian man, went home to be with his Lord on Friday, October 18, 2019 from Kingsport, TN. He was the son of the late Charlie S. and Eva Fields Morrison.... View Obituary & Service Information

The family of Howard Wilson Morrison created this Life Tributes page to make it easy to share your memories.

Send flowers to the Morrison family.