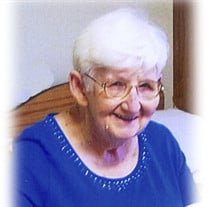 Hazel “Pauline” Hill, age 89, of Johnson City went home to rest Tuesday, June 10, 2014 in the Johnson City Medical Center after an extended illness. Born in Carter County, she was the daughter of the late James Walter and Maude Lyons Shepherd. She was of the Baptist faith, attended Green Pine Baptist Church and was a member of the old Oak Grove Church of God. She was a homemaker until all the children were grown. She then worked with the Milligan College Food Service for nine years. Other than her parents, Pauline was preceded in death by a son, Gary Steven Hill; three sisters, Blanche Shepherd, Mary Ruth Tipton and Mamie Gourley; one brother, Dean Shepherd and a daughter-in-law, Sue Hill. She is survived by her husband of sixty-eight years, Bruce Hill; a daughter, Tammy Hill; both of the home; a daughter and son-in-law, Gary and Melissa Hill Anderson, Newton, NC; a son and daughter-in-law, Jim and Donna Hill, Unicoi, TN; three grandchildren, Shawn Hill, Angie Colbaugh and husband B. J. and Sherry Murray; two great-grandchildren, Coty Sparks and Jamie Murray; a sister, Dorothy “Ruby” Tipton, Johnson City and one brother, Harrell “Dick” Shepherd, Greenville, SC. Many wonderful nieces, nephews and friends also survive. The last five years of her life Pauline was a resident of Pine Ridge Health and Rehabilitation Center where she was lovingly cared for and was an inspiration to many people that came her way. Special thanks to the staff of Pine Ridge for their kindness and care especially to Lois, Barbara, Jessica, Chelsea, Bryan, Roberta and Jaylyn. God bless you for the love you have shown. A service to celebrate the life of Hazel “Pauline” Hill will be conducted at 7:00 P.M. Saturday, June 14, 2014 in the Sunset Chapel of Hathaway-Percy Funeral and Cremation Services with Chaplain Bryan Smith officiating. The family will receive friends at the funeral home from 5:30 – 7:00 P.M. on Saturday prior to the service or at the residence at any time. Graveside service and interment will be conducted at 2:00 P.M. Sunday, June 15, 2014 in Happy Valley Memorial Park. Active pallbearers will be Jim Hill, Shawn Hill, Gary Anderson, Eddie Tipton, Johnny Leach and Johnny Shepherd. Honorary pallbearers will be all of her many nephews. Those wishing to attend the graveside service are asked to meet at the cemetery at 1:50 P.M. on Sunday. In lieu of flowers, memorial contributions may be made to the American Heart Association, 1101 North Chase Parkway, Suite 1, Marietta, GA 30067 in memory of Gary Steven Hill.

Hazel &#8220;Pauline&#8221; Hill, age 89, of Johnson City went home to rest Tuesday, June 10, 2014 in the Johnson City Medical Center after an extended illness. Born in Carter County, she was the daughter of the late James Walter and Maude... View Obituary & Service Information

The family of Hazel Pauline Hill created this Life Tributes page to make it easy to share your memories.

Send flowers to the Hill family.