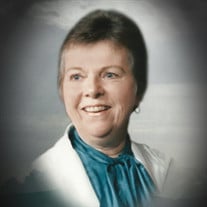 Mrs. Hayes Dyckman Hutchinson, age 84, Powder Branch Community, Elizabethton, TN went to be with the Lord Monday, February 20, 2017 at NHC Health Care, Johnson City. A native of Brockton, MA, she had resided in the Powder Branch Community for over thirty years and was the daughter of the late Rev. Fred Dyckman and Betty Kittredge Dyckman. Mrs. Hutchinson retired as a teacher in Glens Falls, NY. She was a member of Memorial Presbyterian Church, Elizabethton where she sang in the Church Choir and was active in the Women’s Society. In addition to her parents, she was preceded in death by her husband of over fifty-one years, James King Hutchinson, their infant son, Gregory James Hutchinson, and a brother, Wesley C. Dyckman. Those left to cherish her memory include a son, Dirk James Hutchinson and wife Debra, Abingdon, VA; two daughters, Kiersten King Hutchinson, Zimbabwe, Africa and Anne D. Hutchinson Gregg and husband Doug, Jonesborough, TN and a grandson, Thomas Gregg, Jonesborough, TN. Several nieces and nephews also survive. A memorial service to honor the life of Mrs. Hayes Dyckman Hutchinson will be conducted at 6:30 P.M. Thursday, February 23, 2017 at Memorial Presbyterian Church, Elizabethton with Rev. Calvin Jett officiating. The family will receive friends at the Church from 5:00 – 6:30 P.M. on Thursday prior to the service. The family wishes to thank the church and community for years of Christian love and support. Those who prefer memorials in lieu of flowers may make donations to Memorial Presbyterian Church, 100 East F Street, Elizabethton, TN 37643.

The family of Hayes Dyckman Hutchinson created this Life Tributes page to make it easy to share your memories.

Send flowers to the Hutchinson family.