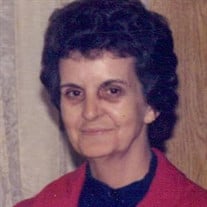 Grace Thursa Ward, age 90, of Elizabethton, TN passed away Thursday, November 14, 2019 in Sycamore Shoals Hospital. A native of Banner Elk, NC she was the daughter of the late William Hicks and Phronia Presnell Hicks. She was a of the Primitive... View Obituary & Service Information

The family of Grace Thursa Ward created this Life Tributes page to make it easy to share your memories.

Send flowers to the Ward family.