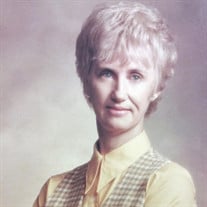 Grace Lee Broome, age 90, joined her Lord and her family on Saturday November 4, 2017. Grace was born on April 28 1927 in Erwin TN to the late Roosevelt (R.V.) and Elizabeth Hopson. In addition to her parents, Grace was preceded in death by her Husband Horace A. Broome Jr., a son Horace A. “Bubba” Broome III and a grand-daughter Whitney Shea Broome. After graduation from Milligan College, Grace began her career in the 1950’s as a licensed real estate agent working alongside her husband to form their own agency -Horace Broome Real Estate- which was the longest active real estate firm in Elizabethton. She broke new ground with this achievement since there were very few women in the field of real estate in the 1950s. But that didn’t discourage Grace and in 1969 she was offered the position as relocation officer for the Elizabethton Housing Authority where between 1969 and 1973 she relocated 144 families and 18 businesses in Cat Island as part of an Urban Renewal Project. This experience only fueled her interest in pursuing other areas of real estate and in 1982 she switched careers once again and found her true calling as a licensed certified VA and FHA property appraiser working in the four county area of Carter, Johnson, Unicoi and Washington Counties. In 2007 she was recognized by the Tennessee Real Estate Commission for 40 plus years of dedicated service to the real estate industry. She would continue working as a licensed real estate appraiser until her retirement in 2013 at 86 years of age! Grace was a member of various city clubs and committees throughout her life (Elizabethton Women’s Club, Board of Realtors, and Chamber of Commerce). She worked diligently raising funds for the American Red Cross in the 1970’s and because of her love for children she spent many years working with the Dolly Parton Imagination Library providing books to Carter County’s preschool children in order to foster their love of reading. She devoted her time and talents serving both Immanuel Baptist Church in her earlier years and later on the First Presbyterian Church doing the things that she did best – teaching children, promoting fellowship and lending her creativity for fund raising and hospitality. Family meant everything to Grace and being an OUTSTANDING cook she loved to entertain both family and friends at every opportunity but especially during the holidays. Her home was always filled with family and friends at Christmas time and although she loved serving her church and her community the one role she cherished the most was that of a Mom and a Grandmother. She just naturally placed the needs of others before her own. Simply put, hers was a life well and generously lived and one that will be sorely missed by all who knew and loved her. Those left who will cherish her memory include her son Rick Lee Broome and wife Teresa of Elizabethton, a daughter Tana Starr Johnson and husband Michael of Elizabethton, a granddaughter Mackenzie Danielle Broome of Johnson City and a very special cousin who was like a sister, Stella Francis of Jonesborough TN. Several cousins, nieces and nephews also survive. The family would like to thank all of the friends, neighbors and caregivers who provided love care and support to Grace and to her family throughout the last few years. You will always hold a special place in our hearts. A few of those who provided continuous love and support to Grace and her family were Christine “Aunt Chris” Eller, Gail Boone, Mildred Chambers, Sue Farthing and Helen Ross. A service to honor the life of Grace Lee Broome will be conducted at 2:30 P.M. Wednesday, November 8, 2017 in the Sunset Chapel of Hathaway-Percy Funeral and Cremation Services with Dr. Bill Kirkwood and The Rev. Dr. Brian Wyatt officiating. Music will be under the direction of Debbie Gouge and David Arney. The family will receive friends at the funeral home from 12:30 – 2:30 P.M. on Wednesday prior to the funeral service. Interment will follow the funeral service on Wednesday in Happy Valley Memorial Park. Active pallbearers will be the WALNUT MOUNTAIN Girls (a.k.a. The Farm), Judy Carver, Catherine Culver, Martha Mauk, Jennifer Goddard, Sherry Hixson, Carolyn Julian, Kathy McKinney, Susan Turrentine, Millie Turrentine, Becky Vaught, Teresa Potter, Sherry Merryman, Paula Counts, Gayle Meredith, Susan Allen, Libby Allen, Sharon Guinn and Jane McKinney. Donations to the Alzheimer Association, 207 N. Boone Street, Suite 1500, Johnson City, TN 37604 and/or the American Cancer Society, Attn: Stacy Hall, 871 Weisgarber Road, Knoxville, TN 37909 may be made in her honor in lieu of flowers.

Grace Lee Broome, age 90, joined her Lord and her family on Saturday November 4, 2017. Grace was born on April 28 1927 in Erwin TN to the late Roosevelt (R.V.) and Elizabeth Hopson. In addition to her parents, Grace was preceded in death by... View Obituary & Service Information

The family of Grace Lee Broome created this Life Tributes page to make it easy to share your memories.

Grace Lee Broome, age 90, joined her Lord and her family on Saturday...

Send flowers to the Broome family.