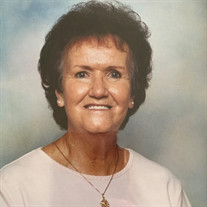 Mrs. Gloria Maxine Jenkins, age 84, of Elizabethton, TN passed away Wednesday, February 6, 2019 at her residence. She was the daughter of the late Frank and Pearl Barnett. Mrs. Jenkins worked for Texas Instruments as an electronic assembler for eighteen years until her retirement. She was a member of Valley Forge Freewill Baptist Church and served meals with the Women’s Ministry. She enjoyed gardening and was known for her immaculate flower gardens and her work ethic. In addition to her parents, she was preceded in death by her husband, Rod “Big Lou” Jenkins on February 17, 2000; two brothers, Willie Barnett and Carmack Barnett and a sister, Edna Simerly. Those left to cherish her memory include a son, Gary Jenkins and wife Lisa, Elizabethton, TN; a daughter, Joy (Joyce) Sottile and husband Johnny, Huntsville, AL; five grandchildren, Jessica White and husband Brad, Lance Jenkins and wife Carrie, Logan Jenkins and wife Megan and Joseph Jenkins, all of Elizabethton and Taylor Holsclaw and fiance’ Nick Jurgens, Huntsville, AL and six great-grandchildren. Several nieces and nephews also survive. A service to honor the life of Mrs. Gloria Maxine Jenkins will be conducted at 2:00 P.M. Sunday, February 10, 2019 in the Sunset Chapel of Hathaway-Percy Funeral and Cremation Services with Rev. Jack Roddy and Rev. Randy Johnson officiating. Music will be under the direction of Mr. David Francis. The family will receive friends at the funeral home from 12:00 – 2:00 P.M. on Sunday prior to the service or at the residence of her son and daughter-in-law, Gary and Lisa Jenkins at other times. Interment will follow the funeral service on Sunday in Happy Valley Memorial Park. Active pallbearers will be Lance Jenkins, Logan Jenkins, Joseph Jenkins, Nick Jurgens, Nathan Jenkins, Brad White, Troy Whitehead and Kevin Avery. Honorary pallbearers will be all of her family and friends. The family would like to express a special thank you to Dr. Michelle Davenport and staff; caregivers, Sue Hall, Virginia Montgomery, Bridgett Peeks and Sherry Williams and Amedysis Hospice nurses, Bekah Edens and Jerry Lawson for their care given to Mrs. Jenkins.

Mrs. Gloria Maxine Jenkins, age 84, of Elizabethton, TN passed away Wednesday, February 6, 2019 at her residence. She was the daughter of the late Frank and Pearl Barnett. Mrs. Jenkins worked for Texas Instruments as an electronic assembler... View Obituary & Service Information

The family of Gloria Maxine Jenkins created this Life Tributes page to make it easy to share your memories.

Send flowers to the Jenkins family.