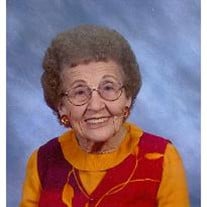 "View This Video Tribute"Gladys Irene Norris McCracken, 91, of the Central Community, went home to be with the Lord early Saturday morning, March 5, 2011 at the Johnson City Medical Center Hospital. She was born in the Laurel Fork Community on Buck Mountain in Carter County on May 29, 1919, to the late Bynum Lee and China RoseAnn Church Norris. She was a homemaker and an active member of Calvary Baptist Church. She was blessed to live 91 active years enjoying the love of her family, and took great pride in her grandchildren and great-grandchildren. She was affectionately known as Grandma Mac. In addition to her parents, she was preceded in death by her husband, Dallas Herman McCracken and a brother, Melbourne Norris.  She is survived by her children, Dennis McCracken, of Aberdeen, NC; Helen McCracken Dudley and husband, Neil, of Roanoke, VA; Gerald McCracken and wife, Karen, of Rock Hill, SC; and Jeffrey “Ben” McCracken, of the home; grandchildren, Jessamyn Rachels and husband, Lee, of Summerville, SC; Dylan McCracken, of New Orleans, LA; Kirk Dudley and wife, KyAnne, of Roanoke, VA; Scott Dudley and girlfriend, Amina Ali, of Cloverdale, VA; and Jason McCracken, Rock Hill, SC; great-grandchildren, Leah and Seth Rachels, Jaylen Reeves and Donte Collins, sisters; Elwanda Reeser and Veryl Hopson, both of Elizabethton; a brother, Beryl Norris and wife, Jo Ann, of Shell Creek; and special friends, Nancy Dennis and husband, David, of Charleston, SC; and Jeanie Walker and husband, Billy, of Johnson City. The funeral service for Mrs. Gladys Irene Norris McCracken will be conducted at 7:00 P.M. Tuesday, March 8, 2011 in the Sunset Chapel of Hathaway-Percy Funeral Home with Dr. Joe Sorah officiating. The family will receive friends at the funeral home from 5:30-6:45 P.M. on Tuesday prior to the service. The graveside service and interment will be conducted at 2:00 P.M. on Wednesday at Happy Valley Memorial Park. Everyone will meet at the cemetery at 1:50 P.M.  Those who prefer memorials in lieu of flowers may make donation to the Calvary Baptist Church Building Fund, 225 North Holly Lane, Elizabethton, TN, 37643.

"View This Video Tribute"Gladys Irene Norris McCracken, 91, of the Central Community, went home to be with the Lord early Saturday morning, March 5, 2011 at the Johnson City Medical Center Hospital. She was born in the Laurel Fork Community... View Obituary & Service Information

The family of Gladys Irene Norris McCracken created this Life Tributes page to make it easy to share your memories.

Send flowers to the McCracken family.