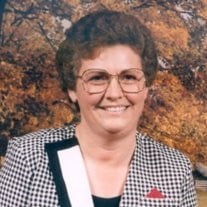 I have fought a good fight, I have finished my course, I have kept the faith: 2 Timothy 4:7 Geraldine Blevins, age 68, of Hampton, passed away Saturday, May 11, 2013 in the Watauga Medical Center in Boone, NC following an extended illness. A native of Carter County, she was a daughter of the late John Arthur and Essie Banner. Mrs. Blevins was a homemaker and attended Upper Gap Creek Church. In addition to her parents, she was preceded in death by a daughter, Sheila Blevins; a sister, Juanita Montgomery; and three brothers, Clyde, Charles, and Kelly Banner. She is survived by her husband, E.J. Blevins, with whom she just celebrated their 50th wedding anniversary on February 3, 2013; a daughter, Lisa Childers and husband, Kenny, Roan Mountain; a son, Terry Blevins and wife, Linda, Hampton; a grandson, Jonathan Blevins, Nashville, TN; a step-granddaughter, Abbey Weaver and husband, Ryan, Elizabethton; a step-grandson, Justin Childers and wife, Brittany, Elizabethton; three step-great grandchildren, Madison, Katlyn, and Kendra; a brother, Carl Banner and wife, Dottie, West Virginia; a sister, Janice Street, Hampton; and a special nephew, Ray Montgomery and wife, Debbie, Hampton. Several additional nieces and nephews also survive. The funeral service for Geraldine Blevins will be conducted at 8:00 P.M. Tuesday, May 14, 2013 in the Sunset Chapel of Hathaway-Percy Funeral and Cremation Services with Rev. Richard Blevins officiating. Music will be under the direction of Patti Hodge, soloist. The family will receive friends from 6:00 to 8:00 P.M. on Tuesday in the funeral home chapel prior to the service or at the residence other times. The graveside service will be conducted at 11:00 A.M. Wednesday, May 15, 2013 in the Happy Valley Memorial Park. Those wishing to attend are asked to meet at the funeral home at 10:15 A.M. on Wednesday to travel together in procession. Active pallbearers will be Donnie Laws, Robert Blevins, Glen Phillips, Anthony Avery, Ray Montgomery, Matthew Laws, Keith Williams, and Dexter Perkins. Honorary pallbearers are Frank Childers, Von Fritts, Jerry Alford, Wendall Williams, Raymond Montgomery, and Richard Church.

I have fought a good fight, I have finished my course, I have kept the faith: 2 Timothy 4:7 Geraldine Blevins, age 68, of Hampton, passed away Saturday, May 11, 2013 in the Watauga Medical Center in Boone, NC following an extended illness.... View Obituary & Service Information

The family of Geraldine Blevins created this Life Tributes page to make it easy to share your memories.

I have fought a good fight, I have finished my course, I have...