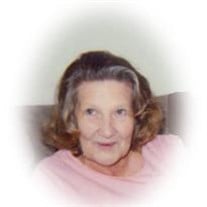 "View This Video Tribute"Frenchie Lee Russell, 75, of 2113 Siam Rd., Elizabethton, passed away Friday, November 19, 2010 at Hermitage Health Care following an extended illness. A native of Carter County, she was a daughter of the late Clarence... View Obituary & Service Information

The family of Frenchie Lee Russell created this Life Tributes page to make it easy to share your memories.