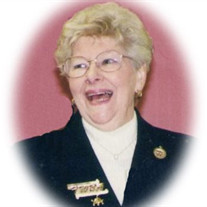 Mrs. Florence Markland Presson, age 89, of Elizabethton, TN passed away Thursday, July 24, 2014 at the residence of her daughter in Aiken, SC. A native of the Fish Springs Community of Carter County, she was the daughter of the late Landon and Arminta Rainbolt Markland. Florence earned a BS degree from Steed College. She had worked as a legal secretary for George Dugger, Sr. and retired from East Tennessee Undergarment as an office manager. Florence was a member of First United Methodist Church of Elizabethton and was a member of the Business and Professional Women’s Club serving as corresponding secretary, chairman of the nominating committee and 1st vice-president. In 1984 she received the “Woman of the Year” award from the Business and Professional Women’s Club. She was a former director of the Elizabethton/Carter County Chamber of Commerce and had served as vice-president for community development and vice-president for organizational development. In 1984 she received the Outstanding Citizen Award from the Chamber of Commerce. Florence was a former member of the ARM Board of Directors. She had received the Presidential Citation for Outstanding Service to Community. Florence was an avid bowler. She was a member and former treasurer of the Tennessee Women’s Bowling Association and was elected to Tennessee Women’s Bowling Association Hall of Fame. She was also a devout fan of the University of Tennessee Volunteers. In addition to her parents, she was preceded in death by her husband, William H. “Bill” Presson on July 13, 2002; a grandson, Jimmy Presson; three sisters, Blanche Cash, Edith Nave and Pauline McMaster and two brothers, L. J. Markland and Ed Markland. Survivors include a daughter and son-in-law, Sandy and Kenneth Carden, Aiken, SC; a son and daughter-in-law, James H. “Jim” and Lisa Presson, Raleigh, NC; a grandson, Will Presson, Raleigh, NC; two granddaughters, Kimberly C. Hadley, Columbia, SC and Kasey C. Wagner, Chattanooga, TN and five great-grandchildren. Several nieces and nephews, and a sister-in-law, Imogene Markland, also survive. A service to honor the life of Mrs. Florence Markland Presson will be conducted at 2:00 P.M. Monday, July 28, 2014 in the Sunset Chapel of Hathaway-Percy Funeral and Cremation Services with Rev. Ray Amos officiating. The family will receive friends at the funeral home from 12:30 – 2:00 P.M. prior to the funeral service. Graveside service and interment will follow the funeral service in the Monte Vista Memorial Park. Active pallbearers will be Will Presson, James McMaster, David McMaster, Brent Dugger, Casey Wagner, Chris Hadley and Woody Laws. Honorary pallbearers will be Richard Dugger, Paul Mottern, Alan Greenburg, Scott Greenburg, Dr. Robert Schubert and Dr. Chris Sholes. Those who prefer memorials in lieu of flowers may make donations to the Memorial Fund of First United Methodist Church, 325 East E Street, Elizabethton, TN 37643.

Mrs. Florence Markland Presson, age 89, of Elizabethton, TN passed away Thursday, July 24, 2014 at the residence of her daughter in Aiken, SC. A native of the Fish Springs Community of Carter County, she was the daughter of the late Landon... View Obituary & Service Information

The family of Florence Markland Presson created this Life Tributes page to make it easy to share your memories.

Send flowers to the Presson family.