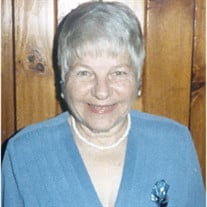 Eva M. Hoffman, 90, of Country Garden Road, Johnson City, went to be with the Lord on Friday, June 6, 2014 at her residence. She was the daughter of the late J. T. Goen, Sr. and wife Eva Lou (Connell) Goen. She was preceded in death by her husband of sixty-seven years, Carl M. Hoffman, as well as her brothers, J. T. Goen, Jr., Roy Goen, Hugh Goen and Ezra Goen; sisters, Elizabeth Juhan and Naomi Harkey and a son-in-law, Lynn D. Shoop. Survivors include a son and daughter-in-law, Ross and Betty Hoffman of West Point, GA, daughter and son-in-law, Carla and Larry Forbes of Johnson City and daughter, Jill Shoop of Watkinsville, GA. She is also survived by grandson, Andy Hoffman and wife Julie of Newnan, GA, granddaughter, Meredith Gardner and husband Bert of Newnan, GA, grandson, Brandon Forbes and wife Ariel of Pittsburgh, PA, granddaughter, Laura Allman and husband John of Knoxville, TN, granddaughter, Marisa Shoop of Quincy, IL and granddaughter, Isabella Shoop of Beaverton, OR; five great-grandchildren, Davis and Betsy Hoffman, Charlotte and Frances Gardner and Eva Kate Allman and two sisters, Mary Louise “Peedie” Brady of Johnson City and Annie “Ann” Hill of Union City, GA. In addition many beloved nieces and nephews also survive. Eva worked as a reservationist for Delta Airlines prior to her marriage. She served on the City Council in Williamson, GA and was a Red Cross volunteer. She served as secretary for a boating club “Calusa Cruise Club” in New Port Richey, FL for a number of years. Eva always served faithfully in her local church and enjoyed singing in the choir and working in the nursery. She assisted her husband with a Bible study for residents of the Appalachian Christian Village Nursing Wing, loving the residents and being greatly loved by them. In her later years she was a member of Hopwood Memorial Christian Church where she loved her church family and attended whenever her health permitted. She was a wonderful wife, mother, grandmother, great-grandmother, sister, aunt and friend. Eva welcomed anyone who came through her door and loved people unconditionally. She leaves behind a host of special friends whom she considered “family”. Graveside service will be held at 2:30 P.M. Friday, June 13, in the Mountain Home National Cemetery. Those wishing to attend the graveside service are asked to meet at the cemetery at 2:20 P.M. on Friday. A Celebration of Life service will take place at 10:00 A.M. on Saturday, June 14 at Grandview Christian Church in Johnson City. In lieu of flowers, donations may be made to Samaritan’s Purse, marked for “Operation Christmas Child Shoebox fund”, P. O. Box 3000, Boone, NC 28607 or Point University (formerly Atlanta Christian College) for the Carl and Eva Hoffman Scholarship, 507 West 10th Street, West Point, GA 31833.

Eva M. Hoffman, 90, of Country Garden Road, Johnson City, went to be with the Lord on Friday, June 6, 2014 at her residence. She was the daughter of the late J. T. Goen, Sr. and wife Eva Lou (Connell) Goen. She was preceded in death by her... View Obituary & Service Information

The family of Eva M. Hoffman created this Life Tributes page to make it easy to share your memories.

Send flowers to the Hoffman family.