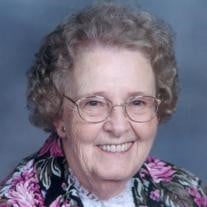 Ethel B. Calhoun, age 92, of Hampton, passed away peacefully surrounded by her loving family on Thursday, November 24, 2011 in the Franklin Woods Community Hospital. A native of Carter County, she was a daughter of the late Chester A. and Sarah Shull Jackson. Mrs. Calhoun was a former employee of the Bemberg Corporation, and was a member of the Eastern Starr #470 and the Hampton Garden Club. She was also a member of the Hampton Christian Church where she was involved with the Carolyn Perry Ladies Circle. In addition to her parents, Mrs. Calhoun was preceded in death by her husband, Roy E. Calhoun; two step-sons, Edgar and Russell Calhoun; and three brothers, Charlie, Bill and John Jackson. She is survived by two sons and daughters-in-law, John and Penny Calhoun, Hampton, and Harvey and Gloria Calhoun, Stow, Ohio; a daughter, Jean Carroll, Elizabethton; step-son, Raymond Calhoun and wife, Pearl, Hampton; and twelve grandchildren and nine great-grandchildren. Several nieces and nephews also survive. The funeral service for Mrs. Ethel B. Calhoun will be conducted at 7:00 P.M. Friday, November 25, 2011 in the Sunset Chapel of Hathaway-Percy Funeral and Cremation Services with Mr. Dwayne Calhoun, Minister, Rev. Marvin Slagle, and her son, Harvey Calhoun, officiating. The family will receive friends from 5:00 to 7:00 P.M. Friday in the funeral home chapel prior to the service or at the home of her granddaughter, Felecia Baird, 1111 Hwy. 321, Hampton. The graveside service will be conducted at 10:00 A.M. Saturday, November 26, 2011 in the Morton-Cave Hill Cemetery in Hampton. Active pallbearers will be Jacob Baird, Sage Geagley, Chris Carroll, Matt Calhoun, Greg Auvil, and Zachary Auvil. Those wishing to attend the graveside service are asked to meet at the cemetery at 9:50 A.M. Saturday. The family would like to express a sincere and heart felt thanks to the staff of Pine Ridge Care and Rehabilitation Center and the second floor nurses at Franklin Woods Community Hospital for all the love and care given to Mrs. Calhoun during her illness.

Ethel B. Calhoun, age 92, of Hampton, passed away peacefully surrounded by her loving family on Thursday, November 24, 2011 in the Franklin Woods Community Hospital. A native of Carter County, she was a daughter of the late Chester A. and Sarah... View Obituary & Service Information

The family of Ethel B. Calhoun created this Life Tributes page to make it easy to share your memories.

Ethel B. Calhoun, age 92, of Hampton, passed away peacefully...

Send flowers to the Calhoun family.