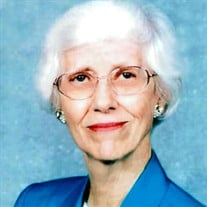 Emma Ruth “Cricket” Riggs passed away on March 30, 2017 in Elizabethton, TN following heart surgery and a brief illness. She was born in Elizabethton, TN on November 7, 1928. She graduated from Elizabethton High School, then Milligan College in 1950 where she sang in the Milligan Choir. She moved to Jacksonville, FL where she taught in the Duval County School System for many years. She received her Master’s Degree in physical education from East Tennessee State University in 1962. She became a guidance counselor at Englewood High School until her retirement. After living in Florida for fifty years, she returned home to Tennessee in 2010. She was preceded in death by her parents, Gertie and Dana Riggs and her sister, Charlotte Young. She is survived by her nieces, Linda Y. McReynolds and husband John, Knoxville, TN and Marilyn J. Young, Johnson City, TN; her cousin, Warren Riggs and wife Patricia, Kingsport, TN and several other dear cousins. Special thanks is given to her best friend from childhood, Mrs. Martha Forbes, Johnson City, TN and her family that “Cricket” loved as she did her own. “Cricket” was a member of the First Christian Church, Elizabethton until her move to Jacksonville, where she was a dedicated member of Englewood Christian Church and upon her return to Tennessee became a member of First Christian Church, Johnson City, being an active member of the Mr. and Mrs. Class. She volunteered at the Appalachian Christian Village, sharing her sweet voice with the residents. A service to honor the life of Emma Ruth “Cricket” Riggs will be conducted at 2:00 P.M. Sunday, April 2, 2017 in the Sunset Chapel of Hathaway-Percy Funeral and Cremation Services with Mr. John Smith, minister and Mr. Kenneth Hartley, minister officiating. Speaker will be, Leah Riggs, a cousin. Music will be under the direction of Diane Junker and Gloria Dudney. The family will receive friends at the funeral home from 1:00 – 2:00 P.M. on Sunday prior to the funeral service. Graveside service and interment will follow the funeral service in Happy Valley Memorial Park. Active pallbearers will be selected from family and friends. Those who prefer memorials in lieu of flowers may make donations to Englewood Christian Church, 4316 Barnes Road, Jacksonville, FL 32207 or to the Washington County Animal Shelter, 3411 N. Roan Street, Johnson City, TN 37604.

The family of Emma Ruth "Cricket" Riggs created this Life Tributes page to make it easy to share your memories.

Send flowers to the Riggs family.