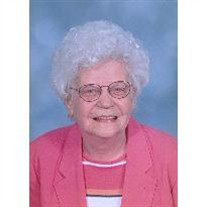 But they that wait upon the Lord shall renew their strength; they shall mount up with wings as eagles; they shall run and not be weary; and they shall walk, and not faint - Isaiah 40:31            Elizabeth Oates, age 90, of Elizabethton, was called home to be with her heavenly Father on Sunday, August 21, 2011 from the Sycamore Shoals Hospital following an extended illness. A native of Carter County, she was a daughter of the late Harry Moore, Sr. and Dora Hale Moore. In addition to her parents, she was preceded in death by her husband, William Oates, two brothers, Robert “Bob” Moore, Sr. and William “Bill” Moore, and her son-in-law, Earl D. Malone.            Mrs. Oates was retired from Kelly’s Food Products. She was a member of Immanuel Baptist Church where she loved attending her weekly bible study classes. When able, Mrs. Oates enjoyed walking and was often seen at the Elizabethton High School track. She and her friend, Ruby Fox, loved going to play Bingo at Wal-Mart where she was a regular winner. Mrs. Oates had many passions and enjoyments in life, but the one that gave her the most pleasure was spending time with her grandchildren.             Mrs. Oates is survived by her daughter, Betty Malone, Elizabethton; two grandchildren, Mark Malone, Piney Flats, and Michelle Malone Gillis and husband, Luke, Gray; three great-grandchildren, Brandi Woods and husband, Blake, Johnson City, Caiden Eli Gillis and Callie Elizabeth Gillis, both of Gray; a brother, Harry Moore, Jr. and wife, Virginia, Elizabethton; her granddaughter-in-law, Sheila Malone, Johnson City; and special friends, Ruby Moffitt, Elizabethton, Ralph and Macel Gardner, Elizabethton, and Pearl Estep, Johnson City. Several nieces and nephews also survive.            The funeral service for Mrs. Elizabeth Oates will be conducted at 7:00 P.M. Tuesday, August 23, 2011 in the Sunset Chapel of Hathaway-Percy Funeral Home, Elizabethton, with Rev. Tim Tapp officiating. A eulogy will be provided by her granddaughter, Michelle Malone Gillis. Music will be under the direction of Mrs. Betsy Pettit. The family will receive friends from 5:00 to 7:00 P.M. Tuesday in the funeral home chapel prior to the service or at the home of her daughter, Betty Malone, at 408 Ferguson Ave., Elizabethton, other times.            The graveside service will be conducted at 10:00 A.M. Wednesday, August 24, 2011 in the Happy Valley Memorial Park. Those wishing to attend are asked to meet at the funeral home at 9:15 A.M. Wednesday to travel together in procession. Active pallbearers will be Luke Gillis, Rick Moore, Jerry Moore, John Moore, Bob Moore, Jr. and Daniel Moore. Honorary pallbearers are Blake Woods, Sammy Nave, Ralph Gardner, Jim Street and her many friends at Immanuel Baptist Church.            The family would like to extend a very special thank you to the staff of Caris Hospice for the loving and devoted care given to Mrs. Oates during her illness. For those who desire, memorial contributions may be made in lieu of flowers to the Immanuel Baptist Church, Building Fund, 205 Hunter Avenue, Elizabethton, TN 37643.

But they that wait upon the Lord shall renew their strength; they shall mount up with wings as eagles; they shall run and not be weary; and they shall walk, and not faint - Isaiah 40:31            Elizabeth Oates, age 90, of Elizabethton, was... View Obituary & Service Information

The family of Elizabeth Oates created this Life Tributes page to make it easy to share your memories.

But they that wait upon the Lord shall renew their strength;...

Send flowers to the Oates family.