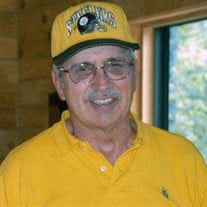 Edward Franklin Hertzog 5/29/1948 - 3/25/2019 Edward F. Hertzog, of Elizabethton, went home to be with the Lord on Monday, March 25, 2019, surrounded by his loving family. At 3:37 pm, Ed Hertzog finally claimed victory over his hard-fought battle with Parkinson’s. Ed was born and raised near Greensburg, Pennsylvania. He dedicated his 70 years on this earth to serving Jesus. Over the course of 50 years, Ed wore many hats, both literally and metaphorically. He served the Lord wholeheartedly in many capacities -- ranging from youth minister to senior minister -- in churches and ministries throughout Pennsylvania, Virginia, and Tennessee. He also served as camp manager for Tidewater Christian Service Camp (Camp Rudolph) and as a relief house parent at East Tennessee Children’s Home. Most recently, Ed worked on the campus of Milligan College where he befriended every student he met. He was a member of First Christian Church in Elizabethton. Ed is survived by his wife Debbie of 46 years; his children, Tami (Paul) Dellinger, Brian (Julie) Hertzog, and Kevin (Allyson) Hertzog; eleven grandchildren and one great-grandchild; siblings, Janet, Ernie, Cathy, Keith, Lee, Lori, and Lisa; and dozens of nieces and nephews. He is preceded in death by his mother, Alice Ruth Hertzog; his father, Edward J. Hertzog; brother, Leslie Hertzog; and granddaughters, Leslie Mae and Zoey Grace Dellinger. Anyone who knew Ed knows he was a man who loved to make people laugh. He had a gift for making even the cheesiest jokes hilarious by inserting his own infectious laughter. Ed was an avid hunter, a loyal Pittsburgh Steelers fan, and an epic storyteller; but more than anything, he was a devoted and loving husband, father, grandfather, great-grandfather, pastor, and friend who will be greatly missed. The family will hold a memorial service to honor the life of Edward F. Hertzog at 7:00 P.M. Wednesday, March 27, 2019 at First Christian Church of Elizabethton with Mr. Clint Andrews and Mr. Michael Klaus, ministers officiating. The family will receive friends at the church from 5:00 – 7:00 P.M. on Wednesday prior to the service. Inurnment will be held at a later date in Pennsylvania.

The family of Edward F. Hertzog created this Life Tributes page to make it easy to share your memories.

Send flowers to the Hertzog family.