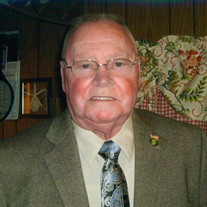 Edward James Edens, age 77, of Elizabethton, TN passed away Tuesday, June 1, 2021 at his residence. He was the son of the late David Elmer Edens and Mary Alice Roberson Edens. He served in the Vietnam War and was branched in Germany, France, Sweden and Turkey. He was a member of Watauga Valley Freewill Baptist Church. Edward was a long time employee, of 37 years for Norwell Company. He loved to fish, play golf and spend time with his grandchildren and great-grandchildren. In addition to his parents, he was preceded in death by three siblings. Those left to cherish his memory include his wife of 56 years, Diane Honeycutt Edens, of the home; a son, James (Robbie) Edens and wife Paula, of Watauga; one daughter, Kim Edens-Bailey and husband Joel, of Elizabethton; five grandchildren, Abigail Poppen and husband Mark, Dustin Edens, Private Jacob Edens(currently serving in the U.S. Marines) and fiancé Chardonnay Roberts, James Edens and Serinity Edens, all of Elizabethton; two special great-grandchildren, Alexia Morris and Leland Poppen and three other special great-grandchildren; a brother, Terry Edens, of Elizabethton; sister, Rita Holt, of Washington, DC and several other nieces and nephews also survive. A service to celebrate the life of Edward James Edens will be conducted at 7:00 P.M. on Monday, June 7, 2021 in the Sunset Chapel of Hathaway-Percy Funeral and Cremation Services with Reverend Bill Greer officiating. Music will be under the direction of Ted Puckett. The family will receive friends between the hours of 5:30 P.M. and 7:00 P.M. prior to the service on Monday. Friends may also visit the home of Mr. and Mrs. Edens at anytime. The family would like to give a special thanks to Ballad Hospice nurses and staff for all their loving care and support during this difficult time. Those who prefer memorials in lieu of flowers, may make donations to St. Jude Children’s Hospital, 501 St. Jude Place, Memphis, TN 38105. Online condolences may be shared with the family and viewed on our website at wwww.hathawaypercy.com. Hathaway-Percy Funeral and Cremation Services are honored to serve the Edens family. Office:(423)543-5544

Edward James Edens, age 77, of Elizabethton, TN passed away Tuesday, June 1, 2021 at his residence. He was the son of the late David Elmer Edens and Mary Alice Roberson Edens. He served in the Vietnam War and was branched in Germany, France,... View Obituary & Service Information

The family of Edward James Edens created this Life Tributes page to make it easy to share your memories.

Send flowers to the Edens family.