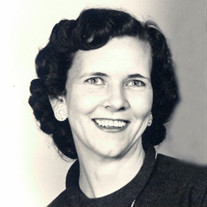 Edna Johnson Arnett, age 95, of Elizabethton, passed away on Monday, January 22, 2018, at Sycamore Shoals Hospital. A daughter of the late James Leonard "Jack" and Annie Higgins Johnson, she was born in Erwin, Tennessee. In addition to her parents, she was preceded in death by her husband, Harry Edwin Arnett, on December 8, 2003, an infant son, Mark Edwin Arnett; her daughter, Janice Ann Cox; two brothers, J.B. Johnson, Jack Johnson; three sisters, Frances Bryant, Ada Caldwell and Betty Jo Hinkle. Mrs. Arnett worked in several grocery stores, including Anderson's Grocery, Smithdeal's Grocery, and Winn Dixie. She was also a cook at Texas Instruments, an Avon Representative and a caregiver. She was a member of First Christian Church in Elizabethton. Those left to cherish her memory include a son, James "Chris" Arnett, and his wife, Sue, of Elizabethton; three grandsons, Neil Arnett; Alan Arnett, James Arnett, and his wife, Denise; a great-granddaughter, Sarah Arnett; a step-grandson, Broc White; two foster grandchildren, Misty Ashburne, James Ashburne; three foster great-grandchildren. Several nieces and nephews also survive. A graveside service for Mrs. Arnett will be conducted at 11:00 AM on Thursday, January 25, 2018, at Happy Valley Memorial Park with Mr. Michael Klause, minister, officiating. Those wishing to attend are invited to meet at the cemetery at 10:50 AM on Thursday. The family would like to express a heartfelt thank you to the staff of Ivy Hall Nursing Home and Sycamore Shoals Hospital for the loving care given to Mrs. Arnett and the family during her time there. Online condolences may be shared with the family on our website: www.hathawaypercy.com . Mrs. Arnett and her family are in the care of Hathaway-Percy Funeral and Cremation Services. Office 423-543-5544.

Edna Johnson Arnett, age 95, of Elizabethton, passed away on Monday, January 22, 2018, at Sycamore Shoals Hospital. A daughter of the late James Leonard "Jack" and Annie Higgins Johnson, she was born in Erwin, Tennessee. In addition to her... View Obituary & Service Information

The family of Edna Johnson Arnett created this Life Tributes page to make it easy to share your memories.

Edna Johnson Arnett, age 95, of Elizabethton, passed away on...

Send flowers to the Arnett family.