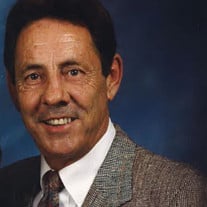 Mr. Eddie G. Hambrick, 74, of Johnson City, went home to be with his Lord, Jesus Christ, on Wednesday, October 19, 2016 at the Johnson City Medical Center Hospital. He was the son of the late Clyde and Corabell Kyte Hambrick and was born in Carter County. In addition to his parents, he was preceded in death by a son, Wesley Hambrick, three brothers, Harold Hambrick, Kenneth Hambrick, John Hambrick and three sisters, Norma Debaneto, Mary Jo Martin, and Helen Ruth Hambrick. Mr. Hambrick was a loving husband, father, grandfather, and brother and was very protective of his family. He loved his God and, his church and his family. He was also an avid sports fan who played golf with his church family, enjoyed basketball and played for Happy Valley High School, loved Tennessee football, and took pleasure in coaching Pee-Wee football where he coached many young people over the years. He was also a Boy Scout leader. He was an active and involved member of Sinking Creek Baptist Church where he supervised the renovations of the church, designed the Pavilion and installed the Pavilion fire place. Along with his late son, Wesley, he designed the church playground. Those left to cherish his memory include his wife, Claudette Hambrick, of the home; a daughter, Julie Hambrick, Johnson City; four grandchildren, Bree, Lexia, Logan and Drew; two great-grandchildren, Collin and Peyton and four brothers, Mack Hambrick, Howard Hambrick, Jack Hambrick and Jr. Hambrick. Several nieces and nephews also survive. A service to celebrate the life of Mr. Hambrick will be conducted on Saturday, October 22, 2016, at 8:00 PM at Sinking Creek Baptist Church with Rev. Garry Edwards officiating. The family will receive friends in the church from 6:00 – 8:00 PM on Saturday and at the home at other times. The graveside service and interment will be conducted on Sunday, October 23, 2016, at 2:00 PM, at Washington County Memory Gardens. Active pallbearers will be selected from family, church family and his friends. Those wishing to attend are asked to meet the family at the cemetery at 1:50 PM on Sunday. The family would like to extend a heartfelt and sincere thank you to Dr. Famoyin and his staff, his special nurse, Stephanie, the staff of Johnson City Internal Medicine and Dr. Farrow for the love, care and concern shown to Mr. Hambrick and to the family during his illness.

Mr. Eddie G. Hambrick, 74, of Johnson City, went home to be with his Lord, Jesus Christ, on Wednesday, October 19, 2016 at the Johnson City Medical Center Hospital. He was the son of the late Clyde and Corabell Kyte Hambrick and was born in... View Obituary & Service Information

The family of Eddie G. Hambrick created this Life Tributes page to make it easy to share your memories.

Send flowers to the Hambrick family.