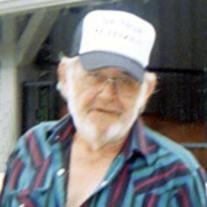 Mr. Earl Gene Blevins, 73, 163 Ruby Avenue, Elizabethton died Tuesday, October 11, 2011 at the Johnson City Medical Center Hospital. A native of Carter County, he was the son of the late Morrell and Eva Lewis Blevins. Mr. Blevins was a truck driver. He was of the Baptist faith and he was a veteran of the U.S. Navy. In addition to his parents he was preceded in death by a son, Ricky Blevins and several brothers and sisters. Survivors include his wife of fifty-two years, Margaret Sims Blevins, of the home; two daughters, Jody Saunders and her husband Steve, Charlotte, NC and Shelly Miller and her husband Randy, Bessemer City, NC; four granddaughters, Summer Blevins, Jessica Blevins and Rebecca Saunders, all of Charlotte, NC and Lorrie Miller, Bessemer City, NC and three great-grandchildren, Quinn Williams, Summyia Williams and Isaiah Blevins, all of Charlotte, NC. Several nieces and nephews also survive. Funeral service for Mr. Earl Gene Blevins will be conducted at 7:00 P.M. Friday, October 14, 2011 in the Sunset Chapel of Hathaway-Percy Funeral and Cremation Services with Mr. Arthur Moore officiating. The family will receive friends at the funeral home from 5:30 – 7:00 P.M. on Friday prior to the service or at the residence at other times. Private disposition will be held at a later date.

The family of Earl Gene Blevins created this Life Tributes page to make it easy to share your memories.