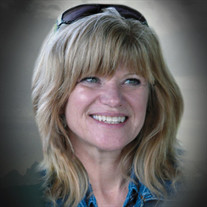 Mrs. Donna Faye Moffitt Jen, age 56, of Staffordsville, KY passed away Saturday, October 28, 2017 at the LaConte Medical Center in Sevierville, TN. A native of Elizabethton, TN she was the daughter of Ruby Fisher Moffitt, Maryville, TN and the late Ralph Moffitt. She was a 1979 graduate of Happy Valley High School and received her Master’s Degree in Early Childhood Education from East Tennessee State University. Mrs. Jen was a teacher at St. Francis of Assisi Catholic School in Pikeville, KY. She was dedicated to her family and to her students. She was of the Catholic faith. Mrs. Jen enjoyed spending time with her husband and with her dogs. In addition to her mother, those left to cherish her memory include her husband, Dr. Phillip Yuan Pei Jen who was her best friend and confidant as she was to him, of the home. She was the one he had searched for his whole life. Her siblings, Vera Wortman and Dennis Moffitt, both of Maryville, TN; Kathy Raymer, Statesville, NC and her twin sister, Debbie Bailey, Johnson City, TN; her father-in-law and mother-in-law, Dr. Chih Jen and I-Mei Jen, Cornelius, NC and a step-son, Kenton Jen, Boone, NC. Several nieces and nephews also survive. A Mass of the Resurrection will be held for Mrs. Donna Faye Moffitt Jen at 1:00 P.M. Friday, November 3, 2017 in St. Mary’s Catholic Church, Johnson City. Interment will follow the Mass in Roselawn Memory Gardens. Active pallbearers will be selected from family and friends. Honorary pallbearers will be Dr. Fadi Akhrass and Dr. Chih Jen. Mrs. Jen will lie in state beginning at 12:00 P.M. on Friday at Saint Mary’s Catholic Church.

The family of Donna Faye Moffitt Jen created this Life Tributes page to make it easy to share your memories.

Send flowers to the Jen family.