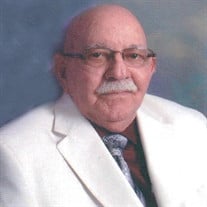 Donald Edward “Duck” Campbell, age 79, of Kingsport, TN passed away peacefully at home on Tuesday, March 13, 2018 with his wife by his side. Don was born October 16, 1938 in Elizabethton, TN to the late George and Nora Campbell. Having a strong patriotic spirit, Don enlisted in the Marine Reserves from 1956 – 1962. After Don’s service in the Marine Reserves, he had a career in the manufacturing industry at North American Rayon. Don was a member of Pleasant Beach Baptist Church in Elizabethton, TN where he made his home and raised his children. Don was preceded in death by his parents, George and Nora Campbell of Johnson City, TN and his brothers, Robert Campbell of Watauga, TN and Fred Campbell of Elizabethton, TN. He is survived by his wife, Joy Gill of Kingsport, TN; his sister, Phyllis Taylor and her husband Kenneth of Johnson City, TN and his children, Jassen Edward Campbell of Bristol, TN and Donald Chad Campbell and his wife Amy of Asheville, NC. Don is also survived by his grandson who he adored, Davis Edward Campbell, son of Jassen Edward Campbell of Bristol, TN; a sister-in-law, Barbara Ann Campbell and numerous nieces and nephews. A service of worship in celebration of Don’s life will be conducted at 6:00 P.M. on Saturday, March 17, 2018 at Hathaway-Percy Funeral and Cremation Services, 101 East F Street, Elizabethton, TN with Rev. Mark Fowler of Pleasant Beach Baptist Church officiating. The family will receive friends at the funeral home from 5:00 – 6:00 P.M. on Saturday prior to the service. A private graveside service will be held in Washington County Memory Gardens, Johnson City, TN. Active pallbearers will be selected from family and friends. Honorary pallbearers will be members of Pleasant Beach Baptist Church. In lieu of flowers, please send donations to Pleasant Beach Baptist Church, 108 Pleasant Beach Road, Elizabethton, TN 37643.

The family of Donald Edward "Duck" Campbell created this Life Tributes page to make it easy to share your memories.