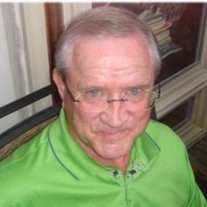 Mr. Don V. Price, age 74, of Knoxville, TN formerly of Elizabethton, TN passed away Sunday, December 29, 2013 in Tennova Residential Hospice, Knoxville following an extended illness. A native of Saltville, VA he was the son of the late James B. and Corene Dowell Price. Mr. Price was a graduate of RB Worthy High School, Saltville, VA, where he was a running back on the 1957 and 1958 championship football teams. Prior to his illness, he was owner and operator of Don Price Direct Sales where he was a clothing wholesaler. Mr. Price was a U.S. Army veteran and he was an avid golfer. In addition to his parents, he was preceded in death by his wife, Judith Ann Price and his brother, James “Buddy” Price. Survivors include daughters, Bethany Price, of North Carolina and Donna Price (Eddie), Knoxville, TN and son, James “Jim” Price and wife Jill, Knoxville, TN; three grandchildren, Nicholas Price, Mason Price and Graeme Price, all of Knoxville, TN; two sisters, Peggy Rolen and Carol Price, Ripplemeade, VA and his brother, Kenneth Price, Roanoke, VA. He is also survived by his special grandchildren Brittany and Jake and special great-grandchildren Bella and Gracie. Several nieces and nephews also survive. The family respectfully requests the honor of your presence at a committal and entombment service to honor and celebrate the life of Don V. Price on Saturday, January 4, 2014 at 2:30 P.M. in the Mausoleum of Peace at Happy Valley Memorial Park with Rev. Lance McClure officiating. The family will receive friends at Hathaway-Percy Funeral and Cremation Services, Elizabethton, TN from Noon until 2:00 P.M. on Saturday prior to the committal service. Those who prefer memorials in lieu of flowers may make donations to East Tennessee Children’s Hospital, 2018 Clinch Avenue, Knoxville, TN 37916.

The family of Don V. Price created this Life Tributes page to make it easy to share your memories.