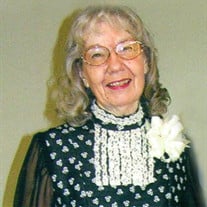 Mrs. Dixie Mae Hyskell, age 86, of Elizabethton, TN went home to be with the Lord on Saturday, August 19, 2017 from Ivy Hall Nursing Home. A native of Lexington, MO she was the daughter of the late Otto and Esther Coen Hackley. Mrs. Hyskell was a model at one time until she started her family. She attended William Jewell College in Liberty, MO and Golden Gate Seminary School. She enjoyed seminary school and loved mission work with her husband. Mrs. Hyskell was a member of Piney Flats First Baptist Church. She was a great cook and loved being with and taking care of her family. She also enjoyed her flowers and gardening. In addition to her parents, she was preceded in death by her husband of sixty-five years, Dr. Joseph F. Hyskell Jr.; a brother, Nolan Hackley and three sister, Lola Seek, Doris Carter and Bessie Hoeflicker. Those left to cherish her memory include three sons, Fred Bruce Hyskell, Elizabethton, TN; Mark Douglas Hyskell and wife Gretchen, Tulsa, OK and Brent Andrew Hyskell and wife Paige, Jacksonville, FL; eight grandchildren, Jenyce Mae Rallo, Mary Deborah Bauer, David Mark Douglas Hyskell, Katie Stukes, Corey Hyskell, Brianna Hyskell, Dustin Brooks and Jonathan Islin; and five great-grandchildren. Several nieces and nephews also survive. A service to honor the life of Mrs. Dixie Mae Hyskell will be conducted at 11:30 A.M. Friday, August 25, 2017 in the Piney Flats First Baptist Church with Dr. Allen Davis officiating. Music will be under the direction of the Church. The family will receive friends from 10:30 A.M. to 11:30 A.M on Friday prior to the service. Graveside service and interment will be conducted at 1:00 P.M. on Friday, August 25, 2017 in Mountain Home National Cemetery, Mountain Home, TN. Active pallbearers will be selected from family and friends. The family would like to express a special thank you to the entire staff of Ivy Hall Nursing Home for their loving care to our mother. Those who prefer memorials in lieu of flowers may make donation to the Piney Flats First Baptist Church, 100 Cherry Road, Piney Flats, TN 37686.

Mrs. Dixie Mae Hyskell, age 86, of Elizabethton, TN went home to be with the Lord on Saturday, August 19, 2017 from Ivy Hall Nursing Home. A native of Lexington, MO she was the daughter of the late Otto and Esther Coen Hackley. Mrs. Hyskell... View Obituary & Service Information

The family of Dixie Mae Hyskell created this Life Tributes page to make it easy to share your memories.

Send flowers to the Hyskell family.