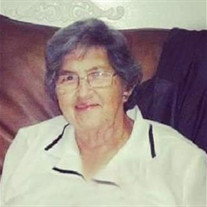 Della Lee Lyons Woodby Driscoll, age 87, of Elizabethton, TN passed away Friday, December 20, 2019 at the residence of a son and daughter-in-law, Darris and Ivy Woodby. She was born in Johnson City, TN and was the daughter of the late George Washington Lyons and Agnes Greer Lyons. Della was a homemaker and she was of the Baptist faith. She enjoyed sewing, gardening and all types of crafts including painting, quilting, ceramics, jewelry making and upholstery work. In addition to her parents, she was preceded in death by her first husband, William Warren Woodby and her second husband Robert Newman Driscoll; a son, Ronell Driscoll; a granddaughter, Contessa Dee Vanorsdale Besaw; a great-grandson, Jonathan Woodby; a daughter-in-law, Carol Kursey; a niece, Patsy Hopson Mutter and three sisters, Dorothy Hopson, Gladys Norton and Phyllis Lyons. Those left to cherish her memory include three sons, Marion Woodby and wife Jean, Martinsburg, WV, Terry Woodby, and Darris Woodby and wife Ivy, all of Elizabethton; four daughters, Evangeline Driscoll Vanorsdale Tipton, Limestone, TN, Teresa Elaine Driscoll Balderas, Johnson City, Darla Davidson Ripley and husband Robert, Harrisonburg, PA and Amanda Lee Driscoll Adkin and husband Lucas, Stopover, KY. Twenty-two grandchildren, several great-grandchildren, several great-great-grandchildren and several nieces and nephews also survive. A service to honor the life of Della Lee Lyons Woodby Driscoll will be conducted at 2:00 P.M. Monday, December 23, 2019 in the Sunset Chapel of Hathaway-Percy Funeral and Cremation Services with Rev. Timmy Broyles officiating. Interment will follow the funeral service in the Lyons Cemetery on Monday. Active pallbearers will be grandchildren, Jacob Woodby, Marion Woodby, Timmy Woodby, Steven Woodby, Lee Woodby, Kevin Woodby, Mark Woodby and Ralph Vanorsdale. Honorary pallbearers will be Ronell Dean “Dino” Driscoll, Jr. and her many friends. The family will receive friends at Hathaway-Percy Funeral and Cremation Services from 6:00 – 7:30 P.M. on Sunday, December 22, 2019 or at the residence of her son and daughter-in-law, Darris and Ivy Woodby at other times. The family would like to express a special thank you to Skyler Forbes, who was her caregiver and was like a granddaughter to Mrs. Driscoll; to Amedisys Hospice, all their nurses who came to give her care and a special thank you to Emilee her regular nurse.

Della Lee Lyons Woodby Driscoll, age 87, of Elizabethton, TN passed away Friday, December 20, 2019 at the residence of a son and daughter-in-law, Darris and Ivy Woodby. She was born in Johnson City, TN and was the daughter of the late George... View Obituary & Service Information

The family of Della Lee Lyons Woodby Driscoll created this Life Tributes page to make it easy to share your memories.

Send flowers to the Driscoll family.