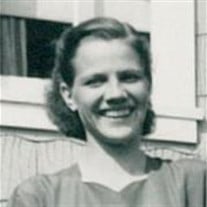 Mrs. Dean Barnett, age 84, of Johnson City, TN passed away Friday, June 23, 2017 in the Johnson City Medical Center Hospital. A native of Butler, she was the daughter of the late Hobart Henry Osborne and Fannie Mae Wilson Osborne. In addition to her parents, she was preceded in death by one sister, Deloris Cooper and two brothers, Kenneth Osborne and Bill Osborne. Mrs. Barnett was a homemaker and a member of Sinking Creek Baptist Church. She loved her family and was like a mother to all of her brothers, sisters, nieces and nephews. Those left to cherish her memory include her husband of sixty-five years, Arvil Junior Barnett of the home; three sisters, Linda Campbell of Johnson City, Maude Proffitt of Johnson City, Shirley Street of Cincinnati, OH; two brothers, Rick Osborne of Johnson City and JC Osborne of Elizabethton. Several nieces, nephews, great-nieces and great-nephews also survive. A service to honor the life of Mrs. Dean Barnett will be conducted at 7:00 P.M. Monday, June 26, 2017 in the Sunset Chapel of Hathaway-Percy Funeral and Cremation Services with Pastor Roy Yelton officiating. The family will receive friends on Monday, June 26th from 5:00 PM – 7:00 PM prior to the funeral service in the chapel or at the residence at other times. The graveside service will be conducted at 1:00 PM on Tuesday, June 27, 2017 at Washington County Memory Gardens. Active pallbearers will be her nephews: Todd Cooper, Dewayne Osborne, Clayton Osborne, Ronnie Osborne, Rex Osborne and Kenny Lovelace. Honorary pallbearers will be her great-nieces and great-nephews. Everyone will meet at 12:00 PM on Tuesday at Hathaway-Percy Funeral and Cremation Services to go in procession to the cemetery.

The family of Dean Barnett created this Life Tributes page to make it easy to share your memories.

Send flowers to the Barnett family.