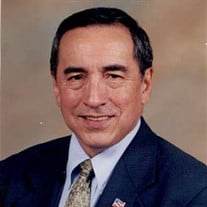 Ret. Col. David F. Bautista, U.S. Army, age 75, of Elizabethton, TN passed away Saturday, March 21, 2015 in the Johnson City Medical Center. He was the son of the late Raymond and Georgia Burrow Bautista and was a lifelong member of Westside Christian Church. During his youth, he was a life guard at the Franklin Club Pool. Mr. Bautista received his BS Degree from East Tennessee State University where he was a student in R.O.T.C. and later became a Commanding Officer. He retired from the U.S. Army after thirty years of service. As a 1st Lt. guarding Fort Knox he would have been deployed to Grenada but could not be spared from his post at Fort Knox. He received his Judicial Doctorate at the University of Tennessee, Knoxville. He had a private practice as an attorney in Elizabethton for fifteen years and was appointed by Governor Ned McWherter to be the District Public Defender for four counties in our region. After his retirement, he was an Adjunct Professor of Law at East Tennessee State University. Mr. Bautista loved to be of service to his community. He was a founder of the Carter County Tomorrow Program and served on many local board of directors for the betterment of our community. He was also active in local fund raising and participated in local telethons. He loved to hunt, horseback riding and water sports and during the reenactment of Liberty! at Sycamore Shoals State Park he played Judge Richardson. Mr. Bautista was a member of Kiwanis, Elks Club, Moose Club, Captain Lynn H. Folsom V.F.W. Post 2166, the American Legion and the Elizabethton Chamber of Commerce. In addition to his parents, he was preceded in death by a brother: Paul Bautista. Survivors include his wife: Sandy Bautista, of the home; a step-son and his wife: Johnny and Christie Bowling, Elizabethton; a niece: Lisa Ensor and husband Ronnie; Elizabethton; a nephew: Tim Bautista and wife Snyte, of Alabama; two step-grandsons: Jonathan Bowling and Nathaniel Bowling, both of Elizabethton; two great-nephews: Bailey Ensor and Richard Bautista and a great-niece: Lauren Bautista. Two special friends, Mary Gaye McKinney and Starr Nave also survive. A service to honor the life of Ret. Col. David F. Bautista, U.S. Army will be conducted at 4:00 P.M. Sunday, March 29, 2015 in the Sunset Chapel of Hathaway-Percy Funeral and Cremation Services with Mr. Greg Key, minister officiating. Music will be under the direction of Glenda Oatman. The family will receive friends at the funeral home from 2:00 – 4:00 P.M. on Sunday prior to the service. Graveside service and inurnment will be conducted at 10:00 AM Tuesday, March 31, 2015 in the Mountain Home National Cemetery. Military honors will be accorded by the Carter County Honor Guard. Honorary pallbearers will be Jeff Kelly, Jerry Crowe, John Davis, Russell Brackens, John Banks, Charles Von Cannon, Dean Blevins, Kent Williams, Joel Piercy, Jim Lonon and Jerome Pate. Everyone will meet at the cemetery at 9:50 A.M. on Tuesday for the graveside service. Those who prefer memorials in lieu of flowers may make donations to the American Cancer Society, c/o Lou Cooter, 415 Washington Avenue, Elizabethton, TN 37643.

Ret. Col. David F. Bautista, U.S. Army, age 75, of Elizabethton, TN passed away Saturday, March 21, 2015 in the Johnson City Medical Center. He was the son of the late Raymond and Georgia Burrow Bautista and was a lifelong member of Westside... View Obituary & Service Information

The family of Ret. Col. David F. Bautista, U.S. Army created this Life Tributes page to make it easy to share your memories.

Send flowers to the Bautista, family.