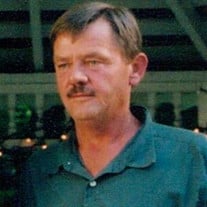 Mr. Dana Lee Jarrett, age 64, of Roan Mountain, TN passed away Saturday, May 20, 2017 at his residence following an extended illness. A native of Carter County, he was the son of the late Bob and Frankie Greer Jarrett. He retired as a bus driver for the Carter County School System and was a carpenter. Mr. Jarrett Loved woodworking and enjoyed building furniture. In addition to his parents, he was preceded in death by two brothers, Ralph Jarrett and Carl Jarrett. Those left to cherish his memory include his wife, Doris Jarrett, of the home; two daughters, Brandie Caraway and husband John, Roan Mountain and Melanie Whitehead, Newland, NC; a son, Brach Jarrett, Roan Mountain; five grandchildren; four brothers, Tommy Jarrett, Roan Mountain, Mack Jarrett, PA; Dickie Jarrett, Newland, NC and George Jarrett, Roan Mountain and one sister, Margaret Palmer, Knoxville. Several nieces, nephews and special friends, David and Katie Donnells and Ben and Hester Barlow also survive. A service to honor the life of Mr. Dana Lee Jarrett will be conducted at 7:00 P.M. Tuesday, May 23, 2017 in the Burbank Freewill Baptist Church, Roan Mountain with Rev. Randy English and Pastor Chris Wilson officiating. Music will be under the direction of Lauren Turbyfill, vocalist and Preston Benfield, guitarist. The family will receive friends at the Church from 5:00 – 7:00 P.M. on Tuesday prior to the funeral service or at the residence at any time. Graveside service and interment will be conducted at 11:00 A.M. Wednesday, May 24, 2017 in the Floyd Greer Cemetery, Roan Mountain. Music will be under the direction of Tim and Sandra Hughes. Active pallbearers will be Frank Church, Brian Blair, Logan Street, Buddy Street, Ben Barlow and John Ingram. Honorary pallbearers will be Jack Johnson, Mike Street, Harold Jarrett and Ray Fore. Everyone will meet at the Church at 10:30 A.M. on Wednesday to go in procession to the cemetery. The family would like to express a special thank you to Dr. Wes Hanson and the Roan Mountain Medical Center, Dr. Jamal Maatouk and the Wellmont Cancer Institute and to Amedisys Hospice for their care of Mr. Jarrett during his illness. On line condolences may be sent to the family at www.hathawaypercy.com.

Mr. Dana Lee Jarrett, age 64, of Roan Mountain, TN passed away Saturday, May 20, 2017 at his residence following an extended illness. A native of Carter County, he was the son of the late Bob and Frankie Greer Jarrett. He retired as a bus... View Obituary & Service Information

The family of Dana Lee Jarrett created this Life Tributes page to make it easy to share your memories.

Send flowers to the Jarrett family.