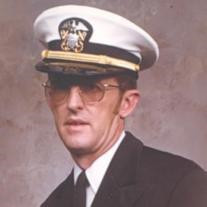 Charles Arthur “Chuck” Commons, age 70, of Elizabethton, passed away Saturday, July 14, 2012 at his residence following an extended illness. A native of Barnesboro, Pennsylvania, he was a son of the late William Hart and Elizabeth Taylor Commons. Mr. Commons retired from the U.S. Navy as a Chief Warrant Officer 4 following 26 years of service in which time he served in the Vietnam War. In addition to his parents, Chuck was preceded in death by a brother, William Oliver Commons, and a sister, Betty Lou Commons Shilling. He is survived by a son, Mike Commons and wife, Jennifer, Elizabethton; a daughter, Kelly Commons Gunn, Nashville; a granddaughter, Mary Kaylee “Punkin” Gunn, Nashville; two sisters, Janet Schiafone and husband, William “Bill”, Pennsylvania, and Phyllis Noble and husband, William “Bill”, Tullahoma, TN; a brother, Richard Commons, Virginia; a special long time companion, Sherry Wilson, Elizabethton, and his former wife and mother of his children, Rita Commons, Bristol, TN. Several nieces and nephews also survive. The family of Mr. Commons will receive friends from 5:00 to 7:00 P.M. on Monday, July 16, 2012 and from Noon to 1:15 P.M. on Tuesday July 17, 2012 prior to the graveside service at Hathaway-Percy Funeral and Cremation Services, Elizabethton. The graveside service will be conducted at 2:00 P.M. on Tuesday, July 17, 2012 in the Mountain Home National Cemetery with Rev. Edwin Talley officiating. Military honors will be accorded by the U.S. Navy Honor Guard and the Carter County Honor Guard. Those wishing to attend the graveside will travel together in procession to the cemetery from the funeral home. The family would like to extend special and heartfelt thanks to the staff of Amedysis Hospice for the loving and devoted care given to Mr. Commons during his illness.

Charles Arthur “Chuck” Commons, age 70, of Elizabethton, passed away Saturday, July 14, 2012 at his residence following an extended illness. A native of Barnesboro, Pennsylvania, he was a son of the late William Hart and Elizabeth Taylor Commons.... View Obituary & Service Information

The family of Charles Arthur "Chuck" Commons created this Life Tributes page to make it easy to share your memories.

Send flowers to the Commons family.