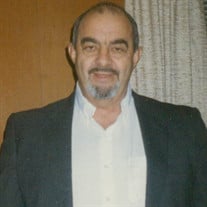 Charles “Julian” Bailey, age 80, of Elizabethton, TN went to be with his Lord on Sunday, August 19, 2018 from Ivy Hall Nursing Home. Born in Elizabethton, TN he was the son of the late George Pierce Bailey and Alice Elizabeth Dugger Bailey. He retired as a Supervisor from Inland Container after forty-five years of service. Mr. Bailey was a member of Southside Christian Church and he served in the U. S. National Guard for eighteen years. He enjoyed fishing and playing golf. In addition to his parents, he was preceded in death by his wife, Phyllis “Susie” Miller Bailey and a sister, Elsie Kyker. Those left to cherish his memory include a son, Robert Bailey and wife Carla, Elizabethton; two grandchildren, Alex Bailey and wife Haley and Andrew Bailey, all of Elizabethton; two great-grandchildren; a brother, Stanley Bailey, Elizabethton; three sisters, Cleo Kelly, Johnson City; Mary Jane Calhoun, Elizabethton and Betty J. Ford, Elizabethton and a special nephew, Gene Bowman, Elizabethton. Several other nieces and nephews also survive. A service to honor the life of Charles “Julian” Bailey will be conducted at 7:00 P.M. Wednesday, August 22, 2018 in the Sunset Chapel of Hathaway-Percy Funeral and Cremation Services with Mr. Michael Koruschak and Mr. Keith Whitehead, ministers officiating. Music will be under the direction of No Name But His. The family will receive friends at the funeral home from 5:00 – 7:00 P.M. Wednesday prior to the funeral service or at the residence of a sister, Betty Ford, 1728 Southside Road, Elizabethton at other times. Graveside service and interment will be conducted at 11:00 A.M. Thursday, August 23, 2018 in Happy Valley Memorial Park. Active pallbearers will be Gene Bowman, Nick Blevins, Danny Blevins, Jimmy Kelly, Wesley Sherrill, Lynn Kyker and Sam Hopson. Honorary pallbearers will be Greg Dugger, James Ding, Ed Clymer, Ronnie Dugger, Forest Dugger, Wayne McGaha, Wayne Mottern, Eddie Kyker and former employees of Inland Container. Military honors will be accorded by the Carter County Honor Guard. Everyone will meet at the funeral home at 10:15 A.M. on Thursday to go in procession to the cemetery. The family would like to express a special thank you to the third floor nurses and staff of Ivy Hall Nursing Home for their care of Mr. Bailey. Those who prefer memorials in lieu of flowers may make donations to Southside Christian Church, 1610 Southside Road, Elizabethton, TN 37643.

Charles &#8220;Julian&#8221; Bailey, age 80, of Elizabethton, TN went to be with his Lord on Sunday, August 19, 2018 from Ivy Hall Nursing Home. Born in Elizabethton, TN he was the son of the late George Pierce Bailey and Alice Elizabeth Dugger... View Obituary & Service Information

The family of Charles "Julian" Bailey created this Life Tributes page to make it easy to share your memories.

Send flowers to the Bailey family.