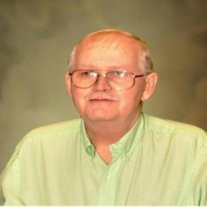 Mr. Carroll Lee “Bud” Sims, age 62, of Elizabethton, TN went home to be with his Lord Sunday, March 10, 2013 following an extended illness. A native of Elizabethton, he was the son of the late Rev. James Elmer Sims and LoRhina Williams Sims. He was retired due to disability from Watauga Industries and he was a lifetime member of the Carter County Rescue Squad having served on the Board of Directors and Board of Trustees. Mr. Sims was very active with the Rescue Squad fundraising efforts through bingo and the haunted house. He attended Freedom Fellowship Center where his son Shannon is the pastor. His favorite hobbies were telling people about Jesus’ love and that Jesus died on the cross for them. He enjoyed fishing, loved his family and friends and never failed to tell them everyday. In addition to his parents, he was preceded in death by three sisters, Charlotte Pruitt, Ruby Chambers and Jeraldine “Cricket” Sims and his father-in-law, C.Y. Peters Sr.. Survivors include his wife of thirty-three years, Jennifer Peters Sims, of the home; three children, Michael Lee Sims, Elizabethton; Shannon Lee Sims, Elizabethton and Shannon’s fiancé Jamie Howell of Unicoi and Ashley Megan Sims, Elizabethton; a sister, Paulette “Sid” Harris and husband Gary, Elizabethton; his mother-in-law, Linda Peters, Elizabethton; brothers-in-law, M.B. “Boyd” Pruitt and Charles Peters Jr., both of Elizabethton; special friend, Jeremy B. Peace and wife Jennifer, Lafayette, GA and his faithful little friend, his Chihuahua Bob. Nieces and nephews, Becky, Allen and Hayley Jarnagin; Will and Regina Barkley; Tim Chambers and wife Jeannie and Steve Chambers and wife Cindy; James Harris and daughter Autumn and Ben Harris, all of Elizabethton and many additional nieces, nephews and cousins also survive. Funeral service for Mr. Carroll Lee “Bud” Sims will be conducted at 7:00 P.M. Wednesday, March 13, 2013 in the Sunset Chapel of Hathaway-Percy Funeral and Cremation Services with Pastor Shannon Sims officiating. Eulogies will be given by Mr. Leonard Peters and Mr. Tim Chambers. Music will be under the direction of Shannon Sims, Ashley Sims and Jeremy Peace. The family will receive friends at the funeral home from 5:00 – 7:00 P.M. on Wednesday prior to the funeral service or at the residence at other times. Graveside service and interment will be conducted at 11:00 A.M. Thursday, March 14, 2013 in the Blevins Cemetery. Active pallbearers will be Gary Sams, Chris Williams, Allen Jarnagin, Will Barkley, M.B. “Boyd” Pruitt, Dale Ward, Rick Potter and James Harris. Honorary pallbearers will be all lifetime members of the Carter County Rescue Squad, Bob Campbell, Ernest Rosenbaum, Dr. Ben Meeks, William J. Byrd, Jerry Arnold, Wendell Treadway and members of Freedom Fellowship Center. Everyone will meet at the funeral home at 10:00 A.M. on Thursday to go in procession to the cemetery. The family would like to express a special thanks to the staff of Amedysis Hospice and special nurses Carmen, Heather and Sherrie for their loving care of Bud. Those who prefer memorials in lieu of flowers may make donations to Freedom Fellowship Center Building Fund, 1784 Highway 91, Elizabethton, TN 37643.

Mr. Carroll Lee “Bud” Sims, age 62, of Elizabethton, TN went home to be with his Lord Sunday, March 10, 2013 following an extended illness. A native of Elizabethton, he was the son of the late Rev. James Elmer Sims and LoRhina Williams Sims.... View Obituary & Service Information

The family of Carroll Lee "Bud" Sims created this Life Tributes page to make it easy to share your memories.

Send flowers to the Sims family.