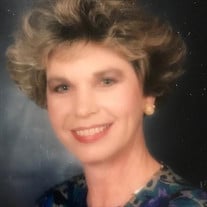 Carla Dean Mottern Jones, age 65, of Elizabethton, TN passed away Tuesday, March 20, 2018 in the Johnson City Medical Center. A native of Carter County, TN she was the daughter of the late Robert Burel and Frances Shepherd Mottern. Carla graduated from Elizabethton High School in 1971 where she was a cheerleader. She ran the Sweet Briar Resort Campground where she loved meeting people. She retired from Franklin Place and also had worked at the Charlotte Taylor Center and Elizabethton Federal. Carla was a member of Brick Christian Church. She enjoyed spending time with her two nieces, Mandy Mottern and Robin Mottern and her two great-nieces and great-nephew, Meredith, Hannah and Holden Roaten, visiting with her step-children, step-grandchildren and all of her cousins. Carla also enjoyed being around friends, fishing, going to the beach, old movies, rock-n-roll music and dancing with her husband. She was very loved by her brother, sister, step-children, step-grandchildren and her entire family. In addition to her parents, she was preceded in death by her husband, Eric William Jones and her dog, “Dutch”. Those left to cherish her memory include a sister, Janet Ensor and husband Jimmy and a brother, Robert Keg Mottern and wife Tamara, all of Elizabethton; four step-children, Stephanie Nebrig and husband David; Ashley Arnold and husband Allen, Whitney Jones and Gillian Goforth; seven step-grandchildren, Ashlin, Brennan and Alex Nebrig; Jacob, Eli and Aly Grace Arnold and Ari Jones. The family will receive friends from 6:00-7:00 P.M. on Saturday, March 24, 2018 at Hathaway- Percy Funeral and Cremation Services. A Celebration of Life service will follow at 7:00 P.M. with Dr. Kenneth Jordan officiating. Music will be under the direction of Mr. Scott Reynolds. Honorary pallbearers will be Gary Ward, Will Garland, Lou Cooter, Curtsy Kenny and Ruthie M. Lewis. Friends may also call at the residences of her sister or brother at other times. Those who prefer memorials in lieu of flowers may make donations to the Elizabethton/Carter County Animal Shelter, 135 Sycamore Shoals Drive, Elizabethton, TN 37643 or to the Elizabethton/Carter County Community Foundation, Bonnie Kate Theater Restoration Project, % John Huber, P. O. Box 695, Elizabethton, TN 37644.

The family of Carla Dean Mottern Jones created this Life Tributes page to make it easy to share your memories.

Send flowers to the Jones family.