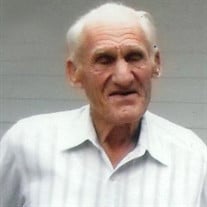 Mr. Carl Blevins, age 89, of Roan Mountain, TN passed away Tuesday, January 9, 2018 in Sycamore Shoals Hospital. A native of Elizabethton, TN he was the son of the late Frank and Pearl Byrd Blevins and had resided in Roan Mountain, TN most of his life. He was retired as a carpenter. Mr. Blevins attended Hopson Chapel Freewill Baptist Church. He enjoyed doing yard work. In addition to his parents, he was preceded in death by his wife of fifty-six years, Iva Lee Blevins and his brothers, Kenneth Blevins, William “Bill” Blevins and Leonard Blevins. Those left to cherish his memory include a son, Junior Blevins and his wife Deszmer; a grandson, Travis Blevins and four sisters, Pauline Brown, Georgia Tolley, Frances Hollands and Arlene Guinn; three step-grandchildren, Amanda Vance and husband David, Jana Lethcoe and husband Travis, Noah Cole and wife Macey and five step-great-grandchildren, Andrew Vance, Olivia, Blakeley, Tristin and Nola Cole, all of Elizabethton. A service to honor the life of Mr. Carl Blevins will be conducted at 7:00 P.M. Thursday, January 11, 2018 in the Sunset Chapel of Hathaway-Percy Funeral and Cremation Services with Rev. Jimmy Holtsclaw and Rev. Charlie Trivette officiating. Music will be under the direction of Scott Whitson, Sean Smith and Kevin Lester. The family will receive friends at the funeral home from 5:00 – 7:00 P.M. on Thursday prior to the funeral service or at the residence of his son and daughter-in-law at other times. Graveside service and interment will be conducted at 11:00 A.M. Friday, January 12, 2018 in the Dotson Cemetery, Roan Mountain. Active pallbearers will be Jackie Triplett, Bunn Potter, Sam Potter, Billy Brown, Travis Blevins and Noah Cole. Honorary pallbearers will be Carl Royer, Bill Street, Bud Smith, David Heaton, Kevin Lester and Kenny Blevins. Everyone will meet at the cemetery at 10:50 A.M. on Friday for the graveside service.

Mr. Carl Blevins, age 89, of Roan Mountain, TN passed away Tuesday, January 9, 2018 in Sycamore Shoals Hospital. A native of Elizabethton, TN he was the son of the late Frank and Pearl Byrd Blevins and had resided in Roan Mountain, TN most... View Obituary & Service Information

The family of Carl Blevins created this Life Tributes page to make it easy to share your memories.