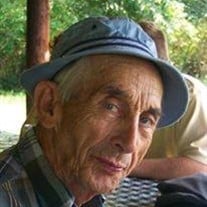 Blaine Hartley, age 100, of Elizabethton, passed away on Friday, August 31, 2018, in the James H. Quillen VA Medical Center. He was a son of the late Letcher Ruben and Virdie Fletcher Hartley and was born in Butler, TN. In addition to his parents, he was preceded in death by his wife, Cora June Pleasant Hartley; his oldest son, Blaine Edward Hartley, two sisters, Florence Hartley and Beatrice Baines Ketchem; a brother, Jonathan Hartley; a sister-in-law, Betty Jo Hartley; and three brothers-in-law, Herman Howard, James Baines and Bill Kemp. Mr. Hartley was a decorated veteran of the United States Army having served his country during WWII and receiving the Purple Heart. He loved to work in the garden, and on old cars and enjoyed being outdoors. He was committed to his faith, and was known for his honesty and integrity. He was a member of Hunter Memorial Baptist Church. Those left to cherish his memory include three children, Evelyn Hartley Hawk (Clayton), of Elizabethton; Barbara Shipley (Ronald) of Huntersville, NC; Dr. Gale Hartley (Leslie) of Mountain City; four brothers, James Hartley, of Knoxville; Roby Hartley (Ethel), of Maryville; Kenneth Hartley, (Jeanne) of Elizabethton; Martin Hartley; (Wanda) of Knoxville; two sisters, Ruth Howard, of Williamsburg, VA; and Margaret Kemp, of Portland, TX; a daughter-in-law, Ann Hartley; of Soddy-Daisy; nine grandchildren and many great-grandchildren. Several nieces and nephews also survive. A service to honor the life of Mr. Hartley will be conducted on Sunday, September 2, 2018, at 3:00 PM in the Sunset Chapel of Hathaway-Percy Funeral Home with Dr. Gale Hartley officiating. Music will be under the direction of John Brookshire, Chris Cain, Kyle Smith, Doug Hartley, Neal Hartley and John Hartley. The family will receive friends in the funeral home chapel from 1:30 - 3:00 PM on Sunday prior to the service, or at the home of his daughter, Evelyn Hawk at other times. The graveside service and interment will be conducted on Tuesday, September 4, 2018 at 1:30 PM at Happy Valley Memorial Park, with Pastor Ron Owens providing the eulogy. Military Honors will be provided by the Carter County Honor Guard. Active pallbearers will be his grandsons. Honorary pallbearers will be the Pastor and Deacons of Hunter Memorial Baptist Church. Those wishing to attend are invited to meet the family at the cemetery at 1:20 PM on Tuesday. Those who prefer memorials in lieu of flowers may make donations to support his love of missions to the Missions Fund C/O Bethany Baptist Church, 5950 Highway 67W, Mountain City, TN, 37683.

Blaine Hartley, age 100, of Elizabethton, passed away on Friday, August 31, 2018, in the James H. Quillen VA Medical Center. He was a son of the late Letcher Ruben and Virdie Fletcher Hartley and was born in Butler, TN. In addition to his... View Obituary & Service Information

The family of Blaine Hartley created this Life Tributes page to make it easy to share your memories.

Blaine Hartley, age 100, of Elizabethton, passed away on Friday,...

Send flowers to the Hartley family.