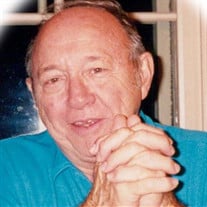 OBITUARY FOR BILL G. YOUNG Mr. Bill G. Young, age 90, of Elizabethton, went home to meet his Lord and Savior on Monday, May 28, 2018 at Hermitage Health Center. He was a native of Carter County, Tennessee and was a son of the late Sam H. Young and Rose Dugger Young. In addition to his parents he was preceded in death by two brothers; Jack Young and Sam Young, two sisters; Iva Gouge and Eileen Young. Mr. Young was a proud veteran of the United States Navy, having served in World War II. He was a graduate of Elizabethton High School and was retired from the City of Elizabethton as a building inspector. Mr. Young was a loving Christian husband, father and grandfather. He was an avid conversationalist who never met a stranger. He was a member of First Christian Church, in Elizabethton where he served as an Elder. He was a member and past President of the Lyons club of Elizabethton, as well as a member of the American Legion in Elizabethton. He enjoyed spending time wood working, and was a skilled artist and handy man. He volunteered coaching little league, and his little league team won the 1967 city championship. He was truly a servant of his community and his church. Those left to cherish Bill’s memory include: his wife of 70 years, Martha Young, of the home; two sons, Philip Young and his wife, Teresa, of Bristol, VA. Keith Young and his wife, Stephanie, of Huntsville AL; one daughter, Jennifer Ward and her husband, Glenn, of Hoover, AL; six grandchildren, Melissa Jamie Emmel and her husband, Dan, Joshua Young, Jack Young, William B. Ward, Spc. Benjamin E. Ward United States Army, Jena Elizabeth Ward; one brother, Joe Young and his wife, Willa Mae, of Hamilton, OH; one sister, Elizabeth Brackman and her husband, Al, of Muncie, IN; a special sister-in-law, Clara Heaton and her husband, Walter, of Elizabethton. Several nieces and nephews also survive. A service to honor the life of Mr. Bill G. Young will be conducted at 12:00 P.M. Thursday, May 31, 2018 in the Sunset Chapel of Hathaway-Percy Funeral Home and Cremation Services with Mr. Michael Klaus, minister, officiating. The family will receive friends at the funeral home from 11:00 A.M. – 12:00 P.M on Thursday prior the service. Committal and interment will follow the funeral service on Thursday at Happy Valley Memorial Park. Active Pallbearers will be as follows; Philip Young, Keith Young, Walter Heaton, Jack Young, Dan Emmel, Ben Ward and Will Ward. Honorary Pallbearers will be as follows; Ken Calloway, Paul Knapp, Josh Young, Joshua Husky, Mike Taylor, Bruce Pierce and Frank Quintaro. Military honors will be accorded by the United States Navy and the Carter County Honor Guard. For those who prefer memorials in lieu of flowers may make donations to: First Christian Church of Elizabethton, Building Fund; 513 Hattie Ave, Elizabethton, TN 37643. The family would like to extend a special thank you to the doctors and staff at Hermitage Health Center, Caris Hospice and the VA Medical Center for all the loving care given to Mr. Young during his illness. Online condolences may be shared with the family on our website at www.hathawaypercy.com Mr. Bill G. Young and his family are in the care of Hathaway-Percy Funeral and Cremation Services, Office 423-543-5544.

OBITUARY FOR BILL G. YOUNG Mr. Bill G. Young, age 90, of Elizabethton, went home to meet his Lord and Savior on Monday, May 28, 2018 at Hermitage Health Center. He was a native of Carter County, Tennessee and was a son of the late Sam H. Young... View Obituary & Service Information

The family of Mr. Bill G. Young created this Life Tributes page to make it easy to share your memories.

Send flowers to the Young family.