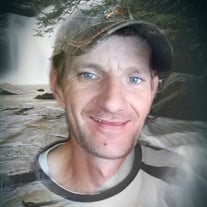 Bill Potter, age 41, of Watauga, TN went home to be with our Lord Thursday, January 10, 2019 in the Johnson City Medical Center. He was born in Johnson City, TN and was the son of Betty L. Goodroe and step-father, Charlie Goodroe, Johnson City and the late Hollies Ralph Potter. He was employed as a tree trimmer. He was a member of Unity Fellowship Church. Bill was the life of the party. He was very caring and family oriented. He loved his wife, family, children and grandchildren. Bill also loved to be in nature, tree climbing, riding his Harley and he enjoyed drawing. In addition to his mother, Betty Goodroe and step-father, Charlie Goodroe, those left to cherish his memory include his wife, Heather Potter, Elizabethton; three children Michaellia Campbell and husband Dakota; Miranda Potter and Dakota Potter, all of Elizabethton; three grandchildren, Aaliyah Campbell, Raelynn Campbell and Noah Campbell, all of Elizabethton; a sister, Trish Mayo, Jonesborough; nieces and nephews, Peyton Mayo, Stephanie Collins and Kristopher Collins, all of Jonesborough; a great-nephew, Luke Mayo; mother-in-law, Nora Keeton, Elizabethton and father-in-law, Steve Aldrich, Watauga. Many other extended family members also survive. A service to honor the life of Bill Potter will be conducted at 12:30 P.M. Monday, January 21, 2019 in the Unity Fellowship Church, Cedar Avenue, Elizabethton, TN with Pastor Greg Wagner officiating. The family will receive friends prior to the service at the Church from 10:30 A.M. – 12:30 P.M. Interment will follow the service in the Garland Cemetery, Erwin, TN. Active pallbearers will be Stephen Aldrich II, Larry Guinn, Dakota Campbell, Gene Schaepe, Allen England, Chris Tilson, George Ian Yourgulez and Lucas Roberts. Honorary pallbearers will be Kris Collins, Ernie Yourgulez, Shane Williams, Eric Williams, Charlie Goodroe, Chad McInturff, Shane Tolley and Larry Hutsel. The family would like to express a special thanks to the staff of the Johnson City Medical Center who helped take care of Bill during his time there. Also, special thanks to all family and friends who sent prayers during this difficult time.

Bill Potter, age 41, of Watauga, TN went home to be with our Lord Thursday, January 10, 2019 in the Johnson City Medical Center. He was born in Johnson City, TN and was the son of Betty L. Goodroe and step-father, Charlie Goodroe, Johnson City... View Obituary & Service Information

The family of Bill Potter created this Life Tributes page to make it easy to share your memories.

Send flowers to the Potter family.