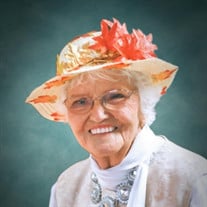 Beulah Jacqueline Lunceford, age 86, of Hampton, Tennessee went home to be with her Lord and Savior on Monday, October 11, 2021 at her residence. Beulah was born in Carter County to the late Woodrow and Blonnie Crowe Bowers. In addition to her parents, Beulah was also preceded in death by her husband, Arthur Lunceford; three sisters; and three brothers. Beulah was a very special Mother and sister who worked hard and took care of her family. She was a woman of God and a member of Valley Forge Christian Church, where she was known as the hat lady. Beulah was a very talented seamstress and enjoyed gardening and working outside. She also enjoyed watching Nascar and football. Those left to cherish Beulah’s memory include her daughter, Janet Lunceford and Ray Price; her sons, Lester Lunceford and wife Shirley and Jerry Lunceford and wife Jennifer; two granddaughters, Heather Price and Kyle Boling and Donna McKeehan and husband Alan; three brothers, Terry Bowers and wife Barbara, Mike Warren and Kenny Warren and wife Jeannie; and three sisters, Patsy Presnell and husband John, June Saults and Carolyn Bishop. Several nieces and nephews also survive. A graveside service to honor the life of Beulah Jacqueline Lunceford will be conducted at 2:00 pm on Wednesday, October 20, 2021 at Mountain Home National Cemetery, New Annex, 215 Heroes Drive, Mountain Home, TN 37684, with Mr. David Seibenaler officiating. Pallbearer will be Mike Warren. Those wishing to attend the graveside service are asked to meet at the cemetery at 1:50 pm. The family would like to especially thank Beulah’s sister, Pat and husband John, and son, Lester for all their special care and support during this difficult time. Also, to the Ballad Hospice staff and her special companion, Lucy.

Beulah Jacqueline Lunceford, age 86, of Hampton, Tennessee went home to be with her Lord and Savior on Monday, October 11, 2021 at her residence. Beulah was born in Carter County to the late Woodrow and Blonnie Crowe Bowers. In addition to... View Obituary & Service Information

The family of Beulah Lunceford created this Life Tributes page to make it easy to share your memories.

Send flowers to the Lunceford family.