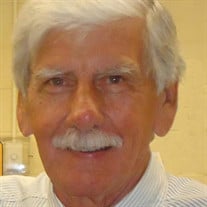 B.J. Lewis, age 83, of Central Community, passed away peacefully on April 4, 2022, at his home surrounded by his family and the farm that he loved. He was a son of the late Tom Lewis and Christine (Gouge) Lewis. B.J. was a graduate of Elizabethton High School (class of 1956) and ETSU with a Bachelor’s Degree in Chemistry. He worked as a chemist for over 20 years at Great Lakes Research in Elizabethton, then at Nuclear Fuels Services in Erwin for decades. He served in the Army Security Agency in Northern England, where he met his wife of 57 years, Anne (Todd) Lewis. He was an avid golfer and traveler, and he always enjoyed baseball, especially the Boston Red Sox. He was also a dedicated member of the Association of former Army Security soldiers of the 13th U.S.A.S.A. Field Station in Harrogate, North Yorkshire, UK, of which he was Vice President for many years. Those left to cherish his memory are his devoted wife, Anne, his three children and their spouses (all of whom he loved as his own children): Gwynneth and Larry Peck of Kingsport, TN, Michael and Kelly Lewis of Johnson City, TN, and Catherine and Douglas Theobald of Wayland, MA. He loved his grandchildren dearly: Megan Peck, Ethan Peck, Karlye Fuller, Japhy Theobald, Isabella Lewis, and Jonah Theobald. Many special family members, such as his sister Shirley Morgan and sister-in-law Brenda Lewis, nephews Monte Morgan, Marcus Morgan, and Shane Lewis, in addition to cousins and friends also survive. He was recently preceded in death by his younger brother, Tommy Lewis, and his brother-in-law Monroe T. Morgan. He will be especially remembered by his “Army buddies” from the 13th U.S.A.S.A. Field Station. A graveside committal service will be held at 11:00 A.M. on Thursday, April 7th at Happy Valley Memorial Park in Elizabethton, TN with Dr. Greg Key, Minister officiating. Pallbearers are Michael Lewis, Larry Peck, Douglas Theobald, Ethan Peck, Japhy Theobald, Shane Lewis, Monte Morgan, and Marcus Morgan. Military Honors will be accorded by VFW Boone Dam Honor Guard. Those who wish to go in procession to the cemetery are requested to meet at Hathaway-Percy Funeral Home at 10:30 A.M. The family would like to give a special thanks to the health professionals who have taken such good care of B.J. over the past three and a half years with a special mention to the nurses at Amedisys Hospice of Elizabethton for their wonderful care. Those who prefer memorials in lieu of flowers may make donations to Westside Christian Church, 1307 W G St, Elizabethton, TN 37643. Online condolences may be shared with the family and viewed on our website at www.hathawaypercy.com. Hathaway-Percy Funeral and Cremation Services are honored to serve the Lewis family. Office: 423-543-5544

B.J. Lewis, age 83, of Central Community, passed away peacefully on April 4, 2022, at his home surrounded by his family and the farm that he loved. He was a son of the late Tom Lewis and Christine (Gouge) Lewis. B.J. was a graduate of Elizabethton... View Obituary & Service Information

The family of B.J. Lewis created this Life Tributes page to make it easy to share your memories.

Send flowers to the Lewis family.