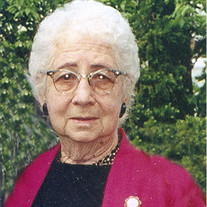 Mrs. Augusta Sheppard Campbell, age 95, formerly of Roan Mountain and Hampton passed away Wednesday, September 17, 2014 in Ivy Hall Nursing Home following an extended illness. A native of Carter County, she was the daughter of the late Philmore and Lydia Fields Sheppard. Mrs. Campbell was a homemaker and had been a foster parent to fifty-two children. She was of the Baptist faith. In addition to her parents, she was preceded in death by her husband, Lones Campbell and all of her brothers and sisters. Survivors include two sons, Billie F. Campbell, Hampton and Bobby D. Campbell and wife Barbara, Clearwater, FL; two grandsons, Jeffery B. Campbell, Elizabethton and Michael D. Campbell, St. Petersburg, FL and two great-grandsons, Logan Barker, Knoxville, TN and Wesley Anthony, U.S. Navy. The graveside service for Mrs. Augusta Sheppard Campbell will be conducted at 11:00 A.M. Saturday, September 20, 2014 in the Isaacs Cemetery, Roan Mountain, TN with Rev. Jim Storie officiating. Active pallbearers will be selected from family and friends. Everyone attending the graveside service will meet at the Rhododendron Chapel, Roan Mountain at 10:15 A.M. on Saturday to go in procession to the cemetery. Friends and family may call at the Rhododendron Chapel, Roan Mountain anytime on Friday, September 19, 2014 until 5:00 P.M.

The family of Augusta Sheppard Campbell created this Life Tributes page to make it easy to share your memories.