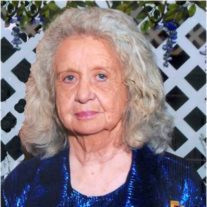 Mrs. Anna Ruth Walsh Campbell, age 78, of Butler, TN passed away Monday, March 3, 2014 in the Franklin Woods Community Hospital following a brief illness. A native of Carter County, she was the daughter of the late Roddie and Alice Green Walsh. Mrs. Campbell was a homemaker. She was a member of Meadowview Baptist Church and the Butler Chapter #218, Order of the Eastern Star. In addition to her parents, she was preceded in death by two brothers, James Walsh and Earl Walsh and two sisters, Gladys Evans and Eula Mae Main. Survivors include her husband of fifty-three years, Raymond Campbell, of the home; a daughter, Tamy Duffield and husband Michael, Butler, TN and three brothers, Rod Walsh and wife Mary Lou, Texas, Bill Walsh and wife Doris and Joe Walsh and wife Joyce, all of Butler, TN. Several nieces and nephews also survive. The family requests the comfort and honor of your presence at the funeral service for Mrs. Anna Ruth Walsh Campbell at 7:00 P.M. Wednesday, March 5, 2014 in the Sunset Chapel of Hathaway-Percy Funeral and Cremation Services with Rev. Richard Jones and Rev. Ray Green officiating. Music will be under the direction of Pilgrims Journey and Jennifer Gillenwater. The family will receive friends at the funeral home from 5:00-7:00 P.M. on Wednesday prior to the funeral service or at the residence at any time. Graveside service and interment will be conducted at 11:00 A.M. Thursday, March 6, 2014 in the Buntontown Cemetery. Active pallbearers will be George Bunton, Delmas Bunton, Kyle Evans, Jamie Walsh, Gary Evans and Ray Evans. Honorary pallbearers will be her Church family and members of the Butler Chapter #218, Order of the Eastern Star. Everyone will meet at the cemetery at 10:50 A.M. on Thursday for the graveside service.

The family of Anna Ruth Walsh Campbell created this Life Tributes page to make it easy to share your memories.