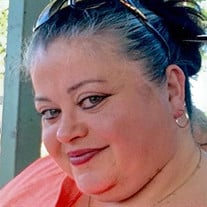 Angela R. Price, age 44, of Elizabethton, TN passed away Tuesday, August 18, 2015 in the Johnson City Medical Center following a brief illness. A native of Johnson City, TN she was a daughter of Manuel Price, Elizabethton, TN and the late Sharon Keller Price. She was a graduate of Hampton High School. She was a homemaker and was a member of East Watauga Avenue Baptist Church. Angela enjoyed spending time with her nieces and nephews. In addition to her mother, she was preceded in death by a sister, Melissa Stanley. Survivors in addition to her father include two brothers, Herman D. Price and Michael A. Price and wife Kathy, all of Elizabethton and a brother-in-law, Gerald Stanley, Nashville, TN. Several nieces, nephews, great-nieces and great-nephews also survive. A service to honor the life of Angela R. Price will be conducted at 7:00 P.M. Friday, August 21, 2015 in the Sunset Chapel of Hathaway-Percy Funeral and Cremation Services with Rev. Richard Blankenship and Rev. Mike Dickerson officiating. The family will receive friends at the funeral home from 5:00 – 7:00 P.M. on Friday prior to the funeral service or at the residence at any time. Graveside service and interment will be conducted at 10:00 A.M. on Saturday, August 22, 2015 in the Treadway Cemetery. Active pallbearers will be selected from nephews and friends. Everyone will meet at the funeral home at 9:15 A.M. on Saturday to go in procession to the cemetery. Those who prefer memorials in lieu of flowers may make donations to the Memorial and Honor Program, St. Jude Children’s Research Hospital, 501 St. Jude Place, Memphis, TN 38105-1942.

The family of Angela R. Price created this Life Tributes page to make it easy to share your memories.