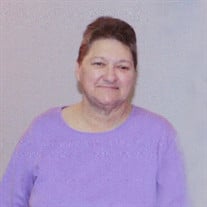 Mrs. Alberta “Bertie” Sims, age 69, of Elizabethton, TN passed away Saturday, December 19, 2015 in the Sycamore Shoals Hospital following a brief illness. A native of Carter County, she was a daughter of the late Archie Holdren and Nora Susan Vaughan Holdren Johnson. “Bertie” was a homemaker and she was a member of Roan Street Church of God. She enjoyed quilting and spending time with her grandchildren. In addition to her parents, she was preceded in death by a sister, Barbara Garland. Those left to cherish her memory include her husband, Homer E. Sims, of the home; a son and daughter-in-law, Chris “Homer” and Heather Sims, Elizabethton; two grandchildren, Connor Sims and Mackenzie Sims, both of Elizabethton; three sisters, Anna Mae Miller, Elizabethton, Ethel Eggers, Bluff City and Louise Lyons Pierce, Elizabethton and a brother, Charles Holdren, Elizabethton. Several nieces and nephews also survive. A service to honor the life of Mrs. Alberta “Bertie” Sims will be conducted at 6:00 P.M. Wednesday, December 23, 2015 in the Sunset Chapel of Hathaway-Percy Funeral and Cremation Services with Pastor Kenneth Bewley and Rev. Terry Dale Blevins officiating. The family will receive friends at the funeral home from 4:00 – 6:00 P.M. on Wednesday prior to the funeral service or at the residence at other times. Graveside service and interment will be conducted at 10:00 A.M. Thursday, December 24, 2015 in the Glover-Sims Cemetery. Active pallbearers will be selected from family and friends. Honorary pallbearer will be Jack Roberts. Everyone will meet at the funeral home at 9:15 A.M. on Thursday to go in procession to the cemetery.

Mrs. Alberta &#8220;Bertie&#8221; Sims, age 69, of Elizabethton, TN passed away Saturday, December 19, 2015 in the Sycamore Shoals Hospital following a brief illness. A native of Carter County, she was a daughter of the late Archie Holdren... View Obituary & Service Information

The family of Alberta "Bertie" Sims created this Life Tributes page to make it easy to share your memories.

Send flowers to the Sims family.